IBM’s latest System Storage DS3500 Express family gives SMBs an affordable entry point into high performance network storage with some unusual expansion options. In this exclusive review we put the DS3512 model through its paces to see if it has the right mix of features, value and speed. 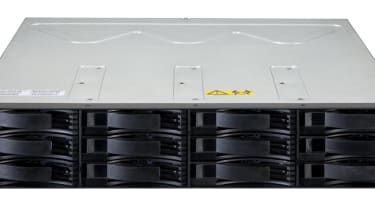 You have a choice of two head units with the DS3512 reviewed here supporting a dozen 3.5in hard disks. The DS3524 is also a 2U appliance but this can handle up to twenty-four 2.5in drives and has a starting price of 3,087. Both models have a single hot-swap controller module which can be upgraded with a second where they run in active/active mode.

The DS3512 can be fitted with a wide variety of disks. Along with standard SAS and full disk encryption (FDE) SAS disks. you can fit near-line SAS disks which have a spindle speed of 7,200rpm instead of the faster 10,000 and 15,000 rpm speeds of more traditional SAS disks. They have the high capacity and low cost of SATA disks but with SAS drive electronics.

Generally sold in 2TB capacities, near-line SAS drives are sounding SATA's death knell for business storage applications. They do away with the need for a SATA to SAS interposer thereby reducing manufacturing costs plus potential points of failures and they have the same level of host queuing support as standard SAS drives.

The controllers have an extensive range of data port options. You start with a pair of fixed 6Gbps SAS ports for DAS connections but there's room for an optional host card. IBM has dual-port 6Gbps SAS or four-port 8Gbps FC and Gigabit iSCSI options. The DS3512 on review came with the FC host card.