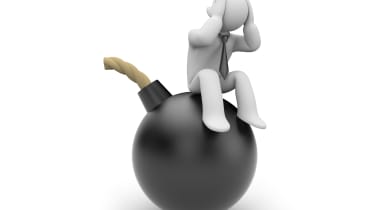 Thus far we have focused on cyber attacks in the public realm, but people's homes are also at threat and will only be more so if technology is increasingly used to help run households.

Earlier this year, at IBM's Information on Demand event in Rome, the host showed off various smart technologies which could monitor power usage, using lighting themes to inform the homeowner how much energy was being used by different items in a living room. This was controlled through the power of computers and RFID tags.

If something like this catches on, cyber criminals could hack a home and make potentially lethal changes to a building's settings. And what if doors and windows were computer controlled, as they are at some of the more high-tech facilities across the world? Hackers could break the locks before even getting to their target.

The home could also prove to be an attractive launch pad for wider attacks as well. Nigel Hawthorn, vice president for EMEA Marketing at Blue Coat, had an interesting theory on how iPod users could be exploited.

Hawthorn suggested that the iPod, the most ubiquitous MP3 player out there, could be infected with malware, which would in turn be plugged into PCs or other devices to help propagate the cyber disease.

"Apple seem to issue a new version of iTunes about once a month, and we're all now very used to seeing the update window on our screens, sighing and clicking OK," Hawthorn explained.

"What if a pop-up looked just like that (or worse still, an infection inside Apple) delivered a malware payload to the iPods that then infect PCs when the iPod is plugged in? The attack could be anything, but the distribution mechanism could be very broad."

There are yet more ways for hackers to infiltrate homes. Satellite signals could be intercepted, allowing someone to control national TV or Radio stations. Imagine both the kinds of radical messages put out and the potential economic disruption. Not to mention days without an Eastenders fix.

In all serious though, a big thank-you to everyone at IBM, Panda Security, Stonesoft and Blue Coat Systems for their contributions.

They brought up some really fascinating ideas, all of them plausible and all worth consideration.

To combat hackers, security professionals need to brainstorm like this and predict what could be on the horizon. Otherwise the world could be held to ransom by highly creative cyber criminals.

As Radiohead's Thom Yorke sang at the turn of the millennium: we're not scaremongering, this is really happening.