Samsung's first dual core Atom netbook looks luxurious, but we're not convinced it's the best buy for most people. Read our review to find out why. 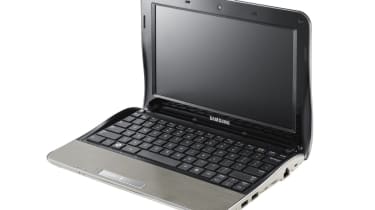 Netbooks have been incredibly popular, in part due to their low price and incredibly long battery life. Both of these have been achieved, in part, due to the low-cost, low-power Intel Atom processors found in most netbooks. The Atoms haven't been very powerful though, but this has been an acceptable compromise given their cost and battery life benefits. Intel's new dual core Atom processor, the N550, is finally here but we're not convinced it makes for a better netbook.

Most netbooks to date have used single core Atom processors. Intel has released dual core versions before, but these have been noticeably more power-hungry versions aimed at desktop computers. The new dual core N550 chip is specifically designed for portable use and uses just a couple of watts more power than the single core Atom N450.

The Samsung NF210 is the first netbook we've seen to come equipped with the N550, but it didn't impress in either our applications performance or battery tests. It was only a few percentage points faster in our Windows application tests. This was the case even in our video encoding and multiple applications tests which should have benefited from the extra processor core. We suspect that performance would have been improved if there was more than 1GB of RAM fitted. Subjectively, it only feels a little snappier than a single core netbook when web browsing and word processing with anti-virus software running in the background.

Battery life was by no means short, but the NF210 didn't last as long as other netbooks we've seen, including Samsung's own N450-equipped N230. It lasted just under eight hours in our light usage battery test, where it was set to scroll through a series of web pages until the battery depletes. It lasted just over four and a half hours in our heavy usage test, where it ran an image editing task repeatedly until the battery ran out.