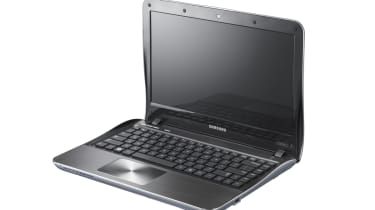 Most laptops tend to look rather staid and boxy but Samsung's latest laptop, the SF310 has a very distinctive and appealing appearance. The lid and the underside have an attractive cream white colour with a curvy, swooping chrome trim, while the wrist rest is covered in metal-effect plastic and a glossy black bezel surrounds the 13.3in screen. It looks like a slightly larger version of Samsung's latest netbook, the NF210, but this is no bad thing as we were quite taken with the appearance of that computer too.

The SF310 isn't just for show though it can be used for serious work while out and about. It weighs just over 2kg. It's not quite as light as other ultra-portable laptops we've seen, due in part to its built-in DVD writer, but it's still light enough to carry around all day. Its battery lasted a lengthy six hours and 20 minutes in our light usage web browsing test and just under two hours in our more demanding, image editing heavy usage test.

These battery life scores are all the more impressive since the SF310 has two graphics chips instead of just one. In addition to the power-saving integrated Intel graphics chip, there's a more powerful, dedicated Nvidia GeForce 310M graphics chip which can be used to speed up programs that support it.

The SF310 uses Nvidia' Optimus technology to automatically switch between the two based on what applications you're using, so you should get the benefits of both chips. It works well, although we'd still prefer the option to manually choose which graphics chip to use when we want to be sure of maximum battery life or performance.