Synology’s new rack mount NAS appliance is fast, packed with features and has lots of expansion potential. It’s also expensive, so read this review to find out whether it’s worth the extra cash. 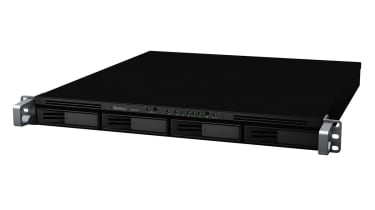 Synology's hybrid RAID allows you to create an array from disks of different capacities and have protection against one drive failing. We tested this with 1TB WD, 500GB WD and 400GB Hitachi drives and ended up with a fault tolerant 816GB array. Hybrid RAID is a useful option to have, but creating a standard RAID array with disks of the same capacity is more efficient and less hassle in the long run.

The new Surveillance Station 5 has increased IP camera support and we tested it using an Axis Q1755 HD model. Once the new search tool had found it on our network we could create E-Maps showing its location, set up motion detection and run scheduled recordings. It's a big improvement over the previous version, but marred by Synology's stinginess only one camera can be used without buying extra camera licenses.

Synology has plenty of backup features as the appliance can run scheduled backups of local data to external USB or eSATA devices. Data can be copied regularly to and from other Synology appliances or Rsync compatible servers and it can integrate with Amazon's S3 remote backup service.

Currently in beta testing, Synology's new Time Backup package automates snapshots of selected folders to another volume on the appliance or external device. A history of file versions can be viewed using the Timeline screen so you can easily select one and restore it to the original location or a new destination. The interface bears a passing resemblance to Apple's Time Machine client backup software.

The RS810RP+ undoubtedly packs in the features but they come at a high price. We found a diskless appliance at Span for 1,165 with the RX410 unit costing an extra 374 from Scan Computers.

QNap's TS-859U-RP Turbo NAS is a good alternative as this 8-bay 2U appliance has many similar features and received an IT Pro Value award for its low starting price. If you aren't set on a rack appliance, another option would Synology's own DiskStation DS1010+ five bay desktop box.

A diskless DS1010+ can be had for around half the price of the RS810RP+. It runs exactly the same firmware so you don't miss out on features and it also accepts a matching five-bay RX510 expansion chassis which costs a further 326 making this package far better value.

The RS810RP+ scores well for its expansion potential as it allows capacity to be doubled on demand. Performance is good and Synology’s latest firmware has an impressive range of features but a price of over £1,100 for what is essentially just a four-bay rack NAS appliance with redundant power supplies is asking too much.