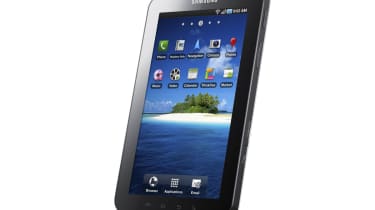 Battery life was impressive. The Tab lasted just under seven hours when playing a H264 video file repeatedly which matches Samsung's claims. When playing the same video, but re-encoded into Flash format, it lasted six and a half hours. This compares very favourably with the iPad which lasted longer in the H264 test at around 11 hours but which also has the benefit of a bigger battery.

As expected for a modern Android device, the Tab supports multitouch gestures. In most apps, the interface feels very responsive, not far behind the iPad in terms of accuracy and speed. Unfortunately we were disappointed and unimpressed with the responsiveness of the interface when using certain other apps, especially the preinstalled web browser.

Scrolling through, panning around and zooming in and out of web pages often felt juddery and sluggish, especially if Flash content was present on the webpage. Adjusting the browser's preferences so Flash content only loads when you tap on it helped improved responsiveness, but it's still not as smooth and slick as the iPad's almost flawlessly responsive touchscreen interface.

Nonetheless the Flash support is useful as it allows the Tab to access websites, videos and online games that are off limits to the iPad, although we did sometimes see lip-sync problems and stuttering playback on some streaming video websites, such as 4oD. Flash playback is made possible by Android 2.2, the only version of Google's mobile operating system so far to support it. The presence of Android 2.2 also means that the Tab supports important business features, such as connecting to an Exchange server, without the need for extra software.