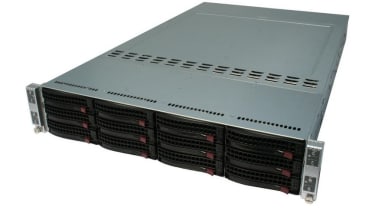 Our particular review system looks even better value as the price also includes 32GB of 1333MHz DDR3 memory for each node. If you can afford 16GB DIMMs you can populate each one with up to 256GB of memory. Bear in mind that if you use cheaper non-ECC memory the maximum memory supported is only 64GB.

The motherboard power and SATA interfaces are hardwired through to an extension bar on the side of the node's casing. This connects with the chassis backplane allowing the node to receive power and its three allotted hard disk bays from a single connector.

RAID options are basic as the AMD SP5100 controller can only handle hardware managed mirrors and stripes and can't be upgraded. However, you could use all three bays for each node as single drives and employ Windows Server to manage them as a RAID-5 array.

Remarkably, there's room to expand as each node has a PCI Express x16 slot that accepts a half-height, half-length card. Later versions of this motherboard are expected to have an extra embedded Mellanox InfiniBand CX4 port for high speed server clustering links.

For cooling, the chassis uses four large fans positioned between the nodes and the drive backplane. The modules do not have hot-plug connectors so a single fan failure will require the entire chassis to be powered down to replace it safely.

Power fault tolerance is much better as the chassis has a pair of 1400W hot-plug supplies and their combined output is shared across all nodes. Despite the Quattro's mighty specification it performed very well in our power tests where we linked the system to our inline meter and then powered each node up.

We took measurements with them running in idle and with SiSoft Sandra pushing all cores on each one to near maximum utilisation. In idle we saw one, two, three and four nodes draw a total of 180W, 336W, 460W and 580W and under pressure these figures rose to 385W, 705W, 1029W and 1346W respectively.