One of the fathers of the internet has called on a Government representative to offer ‘tax credits’ as a way of encouraging businesses to move over to the new internet protocol. 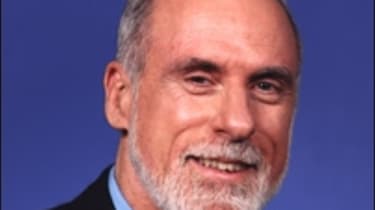 The Government may wish to take a backseat when it comes to businesses moving from IPv4 to IPv6, but one of the pioneers of the internet called them out on this position and offered his advice on what could be done to encourage migration.

Vint Cerf, chief internet evangelist and vice president at Google, followed up a speech by David Hendon, executive board member for the Information Economy at the Department for Business, Innovation and Skills (BIS), by showing up the official, telling him what he thought Government could do to help the move.

"What I would suggest is something akin to tax credits to upgrade equipment to IPv6 capability, something like that," said Cerf condescendingly.

"You would have to do the math, see what happened and the impact it would have, but creating some business incentives might be helpful."

Cerf outlined a scheme in the US, which he called "cash for clunkers," whereby citizens could turn in their gas guzzling cars and get money from the Government towards a new, greener vehicle similar to the UK Car Scrappage Scheme.

"It was a very popular programme so perhaps something similar [for IPv6]?"

The comments were made during the 6UK launch event held in London today. 6UK is a non-profit organisation promoting the migration to the new internet protocol.

Startling figures given at the event showed the last IPv4 addresses were likely to be allocated to regions in Spring next year, with them all being used up as soon as the summer.

Despite this, 70 per cent of UK businesses have not made the move over to the new protocol.

"When those are allocated we are at zero. We are going to burn out," added Cerf.

"It is not flipping a switch day,' we must run IPv4 and IPv6 in parallel and [move over]."

Today was not the first time Hendon had been shown up in public. The Government representative was revealed to be involved in the Phorm scandal in 2009, being the point of correspondence for the EU investigation but also having regular contact with BT around its questionable Phorm trials.

The Home Office is now under scrutiny from the EU for not changing its laws to tackle the Phorm's behavioural advertising software.