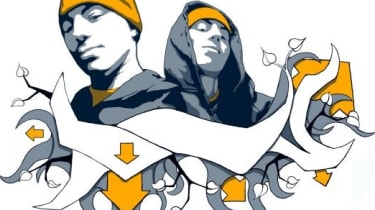 Graffiti is a divisive art form. Indeed, even calling it an art form' would be questioned by some.

Over the past 15 years or so, Banksy has become an almost mythical hero for graffiti lovers. Many would consider his work brilliantly provocative, others would rather have it scrubbed away from the various public structures which his spray paint has graced.

But Banksy is not alone in his efforts to promote graffiti and never has been. Now there are thousands who inspire the same reactions but on the internet, where hundreds of websites are defaced every day.

This year the number of web-based attacks has spiked and the rapid increase in defacements does not look like abating anytime soon. The eBanksy revolution is under way.

It is clear this year has been a big one for security, with the emergence of the most complex piece of malware ever seen in the form of Stuxnet, while various senior public figures have issued stark warnings over cyber warfare.

Website defacements have not received as much press, but it is clear they are prevalent across the web and are a concern for both private and public organisations. According to figures from Zone-H.org, a site where hackers can post their work, the number of yearly attacks has skyrocketed in 2010 to hit the 1 million mark.

In September and October there was a notable spike too. In August, there were approximately 50,000 attacks. This went up to close to 200,000 in the following two months and November does not look likely to be quiet either.

So why are hackers getting so heavily involved in a part of the cyber crime industry that does not even offer any monetary rewards?

Firstly, anyone who has any grasp on the psyche of a hacker will understand that pride is often a big motivator and respect can be a valuable commodity in itself. Zone-H.org is an ideal place to gain some honour amongst thieves.

Not only is the site a good place to showcase defacements, there are league tables too for the top 50 hackers. One league ranks overall defacements, simply based on the number of successful attacks.

The other is for special defacements, which are rewarded with a gold star. To get this distinction, hackers have to hit a notable website, such as a government service.

The fact is, many of the cyber criminals posting on Zone-H.org will simply want to be crowned the greatest of all time and become the Banksy of the online world.