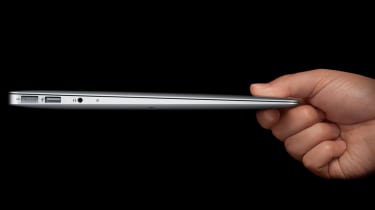 We suspect that Apple has managed to achieve such remarkable battery life, and managed to make the Air so slim, not only by using a big battery which is, unfortunately, not user replaceable, but also by using a solid state disk (SSD) instead of a hard disk. SSDs not only use less power than most hard disks but also have no moving parts so they're more rugged and less prone to damage.

SSDs in laptops, both from Apple and from other manufacturers, are nothing new but Apple has used a SSD with a RAM chip-style form factor in the Air rather than the chunkier hard disk-style form factor used by most other laptop manufacturers. The RAM-style SSD uses the still uncommon mSATA connector, a compact version of the SATA port found on hard disks, and isn't designed to be user-replaceable. You're therefore confined to a 256GB SSD, the largest size Apple currently sells in the Air, which is relatively cramped compared to 500GB and 750GB hard disks.

However, the SSD does speed up common disk-based tasks. Resuming from hibernation, which can take at least 40 seconds to a minute on a 13in MacBook Pro with a 5,400rpm hard disk, is nearly instantaneous on the Air. Rebooting into Windows w(hen it's installed using Apple's Boot Camp utility) which can take a minute or two on the Pro, took just 45 seconds on the Air. Because of the SSD, the Air feels much more responsive than its relatively slow processor and meagre amount of RAM would lead you to believe.