We review Samsung's latest dual-core netbook to see if it's worth buying. 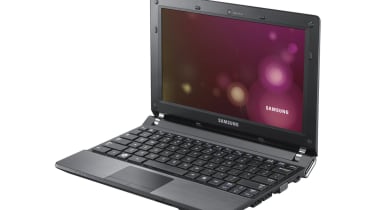 Samsung has a huge range of netbooks and the N350 is the Korean company's latest model. The N350 is one of the first netbooks from any manufacturer to have Intel's new dual core netbook processor, the 1.5GHz Atom N550. However, the results of our tests show that the N350 isn't much of an improvement over older netbooks with single core processors.

The Atom N550 processor was only marginally faster than a netbook with a single core Atom N450 processor in our Windows application benchmarks, despite its extra processing core. We suspect the performance bottleneck is the measly 1GB of RAM. Despite this, the N350 is still fast enough for simple, everyday computing tasks such as word processing and web browsing and it does feel slightly snappier than a single core netbook when multiple tasks, such as a virus scanner and email program, are running in the background.

The N350 weighs just over 1kg so it's very easy to carry around all day. It is slender too it's just 25mm at its thickest point. Unfortunately, Samsung has only managed to achieve this by using a slender battery with a rated capacity of just 33Wh or 2950mAh. In our light usage battery test, the N350 lasted just over five hours. This is very respectable - it is almost long enough to last a transatlantic flight. However Samsung's single core N230 uses a slightly chunkier battery that has double the rated capacity so it lasted nearly 10 hours.

Unlike some of Samsung's more flashy netbook designs, the N350 has a more conservative matte black appearance with a grey lid and a metal-effect plastic wrist rest. This isn't necessarily a bad thing the N350's plainer looks are less conspicuous. The plastic build creaks under pressure more than we'd like, but it feels sturdy enough and the underside never became uncomfortably warm, even when churning through our intensive benchmarks.