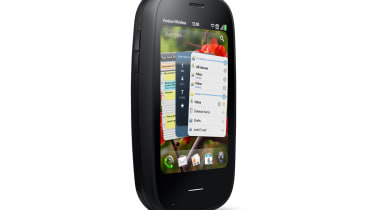 For some reason, though, we couldn't get our Facebook account to synchronise properly as only a select few profile pictures were displayed, which made our contact book look slightly bare. Synergy is a good idea, but there's clearly still room for improvement.

As with previous webOS phones, Pre 2 users can accept, reject or tentatively accept Exchange meeting invitations received in the email app. If you have multiple email accounts, there's also the option to use a unified inbox to see all your messages in one place. There's also a unified view in the Calendar app too, so you could see your work and personal appointments side-by-side, for example.

Universal search is now called Just Type on the Pre 2. To use it you simply begin typing and the search results appear immediately. Just Type searches everything on the Pre 2, including emails, contacts and applications, but it also has third party developer support.

Once a developer, say Twitter, releases a module for it, you can download and install it and search Twitter from your device without having to actually go to the site. This is a really nice feature, but for it to truly live up to its potential it needs the third party developers to build them first and at present, only a very limited selection is available.

Unfortunately, this caveat also applies to Palm's app store, the App Catalog. There are quite a few apps on there (4500 according to Palm) but many of the ones we tried were of very poor quality. Palm has introduced some malleability into webOS's code though, so developers can port apps from iOS very easily Angry Birds was ported in 48 hours, apparently so the number and quality of apps could improve. Currently though, it pales in comparison to Apple's App Store.

Overall, the Palm Pre 2 is a well-equipped smartphone that's fun to use and has some unique and useful user interface tweaks that allow you to whizz about the phone at break neck speed. It's also got all the power and storage you'll require so we didn't experience any significant issues with speed or lag during testing.

Although the Pre 2 and webOS 2.0 are perfectly good in their own right, it all just seems a little too late now given the strength and maturity of the competition, such as the iPhone 4 and the BlackBerry Torch 9800. As much as we like the Palm Pre 2 and webOS 2.0, and as promising as the operating system is, there are few compelling reasons to choose it over any other smartphone. Although we hope otherwise, we suspect the Palm Pre 2 is destined for obscurity.

Palm and HP have created a well-equipped and generally well-designed smartphone with the Palm Pre 2, due in large part to the slick and responsive webOS 2.0. However, when compared to the competition, there’s nothing that really sets the Palm Pre 2 apart from the crowd. It’s good, but it’s not great.