An SSD with a USB3 connection. What could possibly go wrong? Quite a lot as our review reveals. 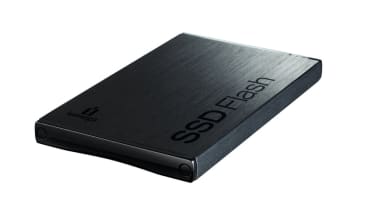 To find out why Iomega's SSD Flash wasn't as fast as we expected, we cracked it open. Inside we found a 1.8in Micron RealSSD C300. This SSD has a SATA3 connection attached to a PLX OXU3101 SATA3-to-USB3 adapter board, the first of its kind. After consulting with our colleagues at our sister site Bit-Tech, we suspect the performance bottleneck lies in this board, since the C300 should easily be capable of faster file transfer speeds. Unfortunately we were unable to confirm this by directly connecting the C300 to our test PC's motherboard since the C300 has a proprietary SATA power connector which we've never seen before.

Despite its disappointing performance, the SSD Flash is still faster than any USB2 hard disk. Unfortunately we still can't recommend it. At a cost of 2.44 per gigabyte, the 64GB SSD Flash is not only expensive, its capacity is also too small to be useful as a backup disk for most servers and client computers.

It might be useful for backing up SSD-equipped laptops and the boot disks of some servers, but most of these won't have built-in USB3 and upgrading them won't always be possible. Plus, when connected over USB2, the SSD Flash was no faster than a USB2 hard disk in our tests so it's of little appeal even for this task.

The SSD Flash isn't completely without merit. We were quite taken by the sturdy, classy-looking black metal enclosure. It's small and light enough to easily fit in a shirt pocket too. The three year warranty is quite lengthy.

The Iomega SSD Flash 64GB is slim and attractive, thanks to its black brushed metal enclosure. Unfortunately its performance is far slower than what we'd expect from both a USB3-equipped storage device and from a SSD. If you must have a USB3-equipped SSD and can live without the warranty, you're better off buying a USB3 enclosure and a SSD separately and fitting them yourself, but we'd still wait until SSD prices are a little more sensible.