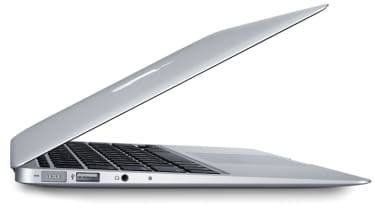 We suspect Apple has stuck with the older Core 2 Duo processors so it could continue to use Nvidia motherboard chipsets and the Nvidia GeForce 320M integrated graphics chip, which are more powerful than their Intel i3 and i5-compatible equivalents. Due to a legal dispute between Intel and Nvidia, there currently aren't any motherboard chipsets from Nvidia that work with the i3 and i5 processors.

The normally silent Air did become noisier when the cooling fan kicked in when the processor was running through our demanding benchmarks. The underside didn't become uncomfortably warm though, so it was still comfortable to use when placed on a lap.

We were pleased by the keyboard and touchpad. Most of the keys are large and give plenty of feedback when pressed, so typing for long periods is comfortable. The exceptions are the F keys which are very small, no doubt a compromise necessary due to the Air's small size. The keyboard isn't backlit like the keyboards on the MacBook Pro range, which will disappoint those who frequently work in dimly lit lecture halls and meeting rooms.

Although the touchpad isn't as large as the touchpads on other MacBooks, it's still very large, especially when compared to other ultra-portable laptops. It supports several multitouch gestures, although these work best under MacOS X and not Windows. The buttons are built into the pad itself, but it still feels accurate to use, even when dragging and dropping icons, which hasn't been the case with touchpads from other manufacturers that have built-in buttons.