We review Lenovo's newest ultraportable laptop equipped with one of Intel's latest processors. Is this budget priced laptop a bargain or a waste of time? Read on to find out. 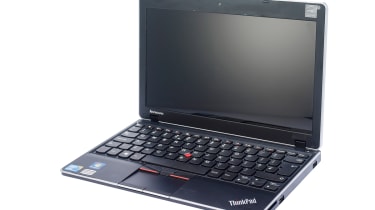 Lightweight ThinkPad laptops have a reputation for being expensive, but Lenovo has actually had a range of affordable ultraportable laptops for some time now. The company's first attempt at an inexpensive ultraportable, the ThinkPad X100e, was indeed light at 1.5kg. However, its AMD Neo processor not only generated huge amounts of heat, making the underside of that laptop unbearably hot, it also quickly depleted the battery very quickly and wasn't even especially quick at running programs.

We have higher hopes for the new 11in ThinkPad Edge which uses one of Intel's latest low voltage Core i3 processors, the 380UM and weighs just 1.5kg. It doesn't have the traditional boxy all-black ThinkPad-styling, but has a slightly more modern appearance with a grey trim, either a matt black or glossy red lid and red LED sleep indicators on the lid and wrist rest. It may not be quite as eye-catching as other ultra-portables we've seen, but it's still stylish in its own understated way. It doesn't feel quite as rigid as other ThinkPads we've used, flexing under pressure more than we'd like, but it still feels reasonably sturdy.

More importantly, the 11in Edge has long battery life. It lasted just over seven hours in our light usage test, which involves web browsing until the battery runs out, which is long enough for a transatlantic flight. It also did well in our more processor-intensive, and therefore more energy-sapping, heavy usage test, which involves a series of image editing tasks. Here it lasted three hours. The large battery does protrude from the rear of the Edge which adds a bit of bulk, but can also be used as a handle.

Applications performance was also good. The 1.33GHz Core i3 380UM processor fared well in our demanding Windows application benchmarks, managing an overall score of 50 making it faster than a laptop equipped with a comparable low voltage Core 2 Duo processor. The 2GB of RAM is a bit stingy though we'd have preferred 4GB at this price. The underside of the Edge did become warm, but it never uncomfortably so, unlike the X100e, its lap scorching predecessor.