Keeping track of your IT infrastructure doesn't have to be expensive or complicated as Karl Wright discovers. 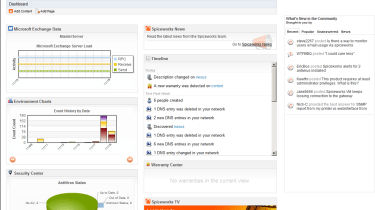 The software has a built-in, and fairly sophisticated, help desk feature. With this you can create a helpdesk portal and then link that portal to your IT support email address. Each time someone sends support an email, Spiceworks automatically creates a support ticket. The ticket tells you who submitted the request (Spiceworks scans Active Directory on setup, so it knows who your users are), the text of their mail, and when the request was submitted. You can then assign the ticket to a tech support worker, attach it to the relevant device in your inventory, track its progress and close it when it's resolved.

Spiceworks installs locally and doesn't share your information with the eponymous developers. However, the reason it's free is that it's ad-supported. So, when you install you have to register for an account at spiceworks.com. The company will then push targeted ads to appear in relevant places in the Spiceworks interface. For instance, if no Exchange server is detected you'll be shown an ad for hosted email.

The adverts really aren't obtrusive. What's more, your Spiceworks account also gets you access to user forums, training videos and useful repositories of white papers and other tech resources on lots of interesting topics.

Spiceworks has an enormous amount of useful features for absolutely nothing. Having your inventory in one place and being able to easily see network events in real time was incredibly useful. And the free helpdesk and ticketing system will greatly simplify support for small businesses who couldn't otherwise afford such a thing.

As long as you don’t mind the occasional advert and are prepared to put some effort into setup, Spiceworks is a great program that makes life a lot easier for small business IT support teams.