Comprehensive PDF creation, editing and exporting facilities at a fraction of the price of Adobe Acrobat Pro. Is it a bargain or do you only get what you pay for? 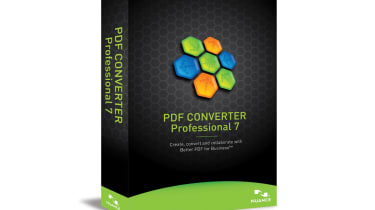 The PDF format has a lot going for it. Attach one to an email and there's an extremely high chance that the recipient will be able to open it, the layout and formatting won't have fouled up and even without using password-protected permissions it's unlikely that anyone will change its contents.

When it comes to converting documents to PDF, there are plenty of free applications to choose from, most of which present themselves as a printer driver. At the other end of the scale is Adobe's pricey Acrobat Pro X, which is best described as a PDF-based workflow management tool.

Sitting between these two extremes is Nuance PDF Converter Professional. It too provides a printer driver for generating PDFs from any application, but it also installs plug-ins for one-click conversion from Microsoft Office and Internet Explorer alongside an application for editing PDFs.

PDF Converter Professional is priced much nearer to the free utilities than Acrobat Pro, but in terms of features, it has more in common with the latter. It's the little differences that add up, though; where Nuance and Adobe's software differs, Adobe invariably comes out on top.

For example, Nuance's plug-ins aren't as sophisticated as Adobe's. Exporting from Internet Explorer doesn't retain active links and insists on capturing whole web pages rather than just selected elements on a page. Nuance's Ribbon tab for Word lacks Adobe's ability to handle PDF mail merges, to import comments made on PDFs or to embed Flash animations.

Its Word, Excel and PowerPoint plug-ins include options to import a PDF and turn it into an editable document, though. Formatting was preserved reasonably well but seldom perfectly, and some pages were badly garbled. It's an interesting feature but not one we can imagine using regularly. It's no longer exclusive to Nuance, either Acrobat Pro X now converts PDFs to Excel and Word formats.