FalconStor’s latest FDS SA101 data deduplication appliance has a range of unusual data reduction features. It performed very well in our lab tests but is expensive so read this review before buying to find out if it’s worth the extra cash. 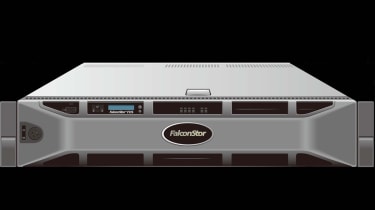 We configured a test server with Windows Server 2008 R2 and chose CA's ARCserve as we find it more amenable than Symantec Backup Exec when using network shares as backup locations. After the first full backup was completed, we modified 2 per cent of data in 40 per cent of the files prior to each subsequent backup.

We used FalconStor's statistics to see what ratios were being achieved and after a one-month simulation we saw it report a deduplication ratio of 8.9:1. This was better than Quantum's DXi4520 which reported a ratio of 7.22:1 for exactly the same test.

To gauge general performance we used ARCserve to copy a 28GB test folder with over 13,000 files to a new share on the appliance with automatic deduplication enabled. Over Gigabit Ethernet the job was completed at a rate of 168GB/hour as opposed to Quantum's 152GB/hour.

Our tests show that FalconStor uses more efficient deduplication algorithms than Quantum and is faster for backup operations. However, it costs a lot more and this is highlighted by the size of the repositories offered by each vendor.

The FalconStor FDS SA101 appliance has versatile policy-based deduplication and superior remote site replication features. However, if cost is a high priority and you're prepared to accept slower performance for data reduction and backup operations then Quantum's DXi4500 family of appliances are better value.

FalconStor’s FDS SA101 performed exceptionally well in our lab tests showing it was capable of providing higher backup speeds and better deduplication ratios than much of the competition at this level of the market. Remote site replication is also good as it supports up to 150 sources as standard but the repository is very small considering the high price and it can’t be upgraded.