A digital camera with a built in projector – it’s bound to impress, but for how long? 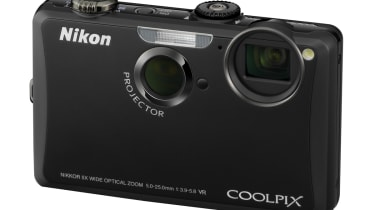 Ironically for a Nikon product, the S1100pj is a better projector than it is a camera. The 14-lumen brightness is useless in daylight but under household artificial light it produces a useable 20in image from about a metre away. Focus is a little soft and colours are washed out but it's good enough for sharing snaps or videos. The supplied IR remote works elegantly and saves stabbing at the touchscreen, and a cheap mini tripod makes an effective stand to position it.

Picture quality was the same when connected to a laptop, and installation went without a hitch. However, business meetings are a more demanding environment than showing off your holiday snaps; here the projector's limitations become more significant. There's no mains socket and it can't draw power over the USB connection. The 60-minute battery life is cutting it fine for the average meeting. The resolution of the projected image is limited to a cramped 640x480 pixels, although this is a common limitation of many pico projectors.

The main problem is the image brightness. Even with the blinds drawn, the usable screen size isn't much bigger than a laptop screen, and far dimmer. We can't imagine many situations where the SP110pj would be a better choice than a laptop either by itself, or paired with a standard projector.

It is possible to export PowerPoint presentation as JPEGs and load them onto an SD card, which means a laptop isn't necessary. The process should be much easier than it is, though the PDF manual describes a convoluted folder and file name structure that must be adhered to in order for the JPEGs to be recognised. Users are left to find a batch-renaming utility for the files, or rename each one manually.

However, as convoluted as this process is, it might just come in useful in situations where a conventional projector and laptop aren't feasible. Impromptu presentations in a bar or restaurant come to mind, albeit with a shudder of self-loathing at having contemplated the idea.

A combined digital camera and pico projector is more likely to appeal to teenagers than business users, but it does have its moments in the workplace. We’re not convinced by the ability to use the projector with a laptop, as the dim image is likely to be overpowered by even a small laptop screen. The option to play PowerPoint slides – saved as JPEGs – from a SD card makes more sense. The camera function is a disappointment, though. We’d be more inclined to go for the 3M MPro150, a dedicated pico projector that’s almost as expensive but that can read Office documents straight from a MicroSD card.