Apple’s huge, high-resolution 27in monitor blends typically gorgeous design with great image quality, yet we're still not totally enamoured with it. Read on to find out why. 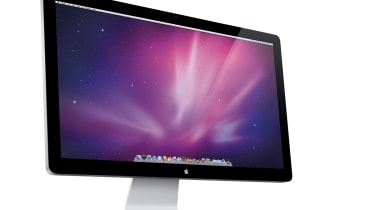 Apple may be best known for its iOS handhelds and MacOS X computers, but it also makes monitors. The company has discontinued its 24 inch and 30 inch monitors to make way for the 27in newcomer. The question is whether it's got the image quality to match its newly formed figure.

Resembling a slimmed-down 27in iMac, it's no less striking than the 24 inch and 30 inch models it replaces. The trademark combination of aluminium grey and gloss black makes many of its similarly-priced high-end rivals look positively dull by comparison. Where some of those self-same rivals can feel somewhat plasticky, the Cinema Display's 10.6kg frame feels luxuriously robust.

There's little lacking in terms of on-paper specifications either. Apple has employed a high-quality H-IPS panel with a pin-sharp 2,560 x 1,440 pixel resolution, and has also included an integrated set of 2.1 speakers and an iSight webcam.

However, some quirks soon become apparent. The stand, for one, is a disappointment, merely tilting back and forth. Similarly-priced models provide height-adjustable stands and portrait-mode pivots as a matter of course.

Connectivity is limited, too. Alongside the power socket and three-port USB hub, there's just a single captive cable sprouting from the rear which splits to provide Mini-DisplayPort, USB and a MagSafe power connector for directly charging an Apple laptop. It's needlessly limiting: if your graphics card, or Apple notebook for that matter, isn't equipped with a Mini-DisplayPort output, you'll just have to stump up for a suitable DVI to Mini-DisplayPort adapter.

Neither is that captive cable particularly long. Should you wish to attach the Cinema Display to a computer underneath or at the side of a desk, it may not even reach.

Practical issues aside, there is something rather alluring about the Cinema Display's minimalist approach. Plugging in the USB and Mini-DisplayPort cables to our PC and Mac test systems automatically diverted sound through the Cinema Display's built-in 2.1 speakers, and the iSight camera in the display's bezel connected without fuss.