Panasonic's latest ToughBook laptop is not only more rugged than other laptops, it also has a touchscreen. Is this enough to justify its high price? Read our review to find out. 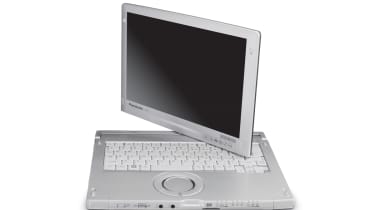 We were surprised to discover that the CF-C1 is equipped with a fast 2.4GHz Core i5 520M processor. Although this explains the rather mediocre battery life when there's just one battery fitted, it also helps the CF-C1 achieve a high overall score of 90 in our demanding Windows benchmarks. It would've scored even higher if it had more memory just 2GB of RAM is rather stingy at this price. The 250GB hard disk is also rather small, but it should suffice for storing all but the biggest collections of office files.

Given the high cost of the CF-C1 we were surprised by the poor quality of the keyboard and touchpad. Although the keys themselves feel responsive, their small size and odd layout make typing error-prone until you get used to its eccentricities. For example, the space bar, Tab and Caps Lock keys are very small, while the Home/End key takes the right Shift key's usual place. The touchpad is accurate, but its small size and circular shape make it a little frustrating to use. These issue won't be a concern if you primarily plan on using the touchscreen though.

Alongside the Gigabit Ethernet port and 802.11n wireless networking, there's also a built-in 3G modem. The SIM card slot is located on the front edge of the CF-C1 and is protected by a rubber flap. There's just a VGA port for connecting a monitor or projector there's no HDMI connector. We were especially surprised to find a CardBus slot instead of a newer ExpressCard slot for connecting peripherals. Unless you already have a lot of CardBus peripherals you want to use, we'd rather have had an ExpressCard slot as there are far more ExpressCards currently available.

The ToughBook CF-C1 is very much a nice product. If you want a touchscreen computer but don't need to run Windows applications, an iPad would be a better choice. If you want a rugged computer but don't need a touchscreen, one of Panasonic's non-touchscreen ToughBooks would be better value. Even if you want a rugged touchscreen Windows computer, you'll have to put up with some peculiar hardware design choices, such as the cramped keyboard and touchpad. You'll also want to invest in the second battery to get the most out of it.