A sleek and slender Dell ultra-portable laptop with built-in 3G that leaves us lukewarm. Why? Read our exclusive review to find out. 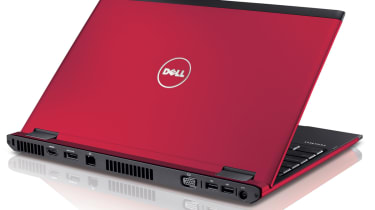 Dell may no longer sell its sleek and light Adamo ultra-portable laptop, but the influence of that computer can still be felt in Dell's current range of notebooks. The new Vostro V130 may be aimed at businesses, but it's far from staid-looking - its thin and sleek appearance looks great.

The V130 weighs just 1.66kg so it's very light. The angular edges aren't to our taste though we'd have preferred a smoother, more rounded design that felt more comfortable in our hands when carried around. Although the unit shown is a bright metallic red, the V130 is currently only available in a more conservative grey. Even though it's just 19mm thick, it feels rigid and robust.

The V130 is the first laptop we've seen to come with an ultra low-voltage version of the Intel Core i5 processor, which should use less power than standard Core i5 chips. Although its clock speed of 1.33GHz seems rather measly, it can temporarily increase its speed to 1.86GHz for tasks that need it thanks to the Turbo Boost feature. It scored 60 overall in our Windows application benchmarks, which is respectable for an ultra low voltage processor.

The underside did become a bit warm and the fan slightly audible when the processor was running our benchmarks, but it was far from intrusive. One odd aspect of the V130's design is that the majority of the ports are located on the rear making them slightly inconvenient to reach. The exceptions are the memory card slot on the right hand side and the SIM card slot for the 3G modem on the front. There are three USB2 ports, one of which doubles as an eSATA port for connecting fast external hard disks.