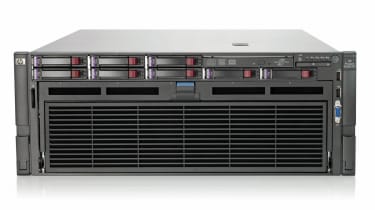 the DL380 G7. It provides a dedicated Fast Ethernet port for management access and you also have pairs of USB and PS/2 ports.

The system board has two internal USB ports, as well as a connector for a SSD which slots into the side of the chassis. The SPI board has a SD memory card slot. These are all provided specifically for booting the server with an embedded hypervisor so you have a big choice of boot media to use.

We thought Fujitsu's RX600 and its ten PCI Express slots had the edge for sheer expansion potential but HP goes that little bit further. The system board has five available PCI Express slots but you can add an extra I/O expansion board with options for six more slots which can even be used as a mixture of PCI-E and PCI-X.

Power redundancy is good as the review system includes four 1200W hot-plug modules, the maximum number possible. It did well in our power tests with the four Xeons drawing 530W in idle and peaking at 736W under extreme pressure from SiSoft Sandra.

This shows the benefits of the six-core Xeons as Dell's R910 and its quartet of X7550 eight-core Xeons hit a peak of 859W under load. Both IBM's x3850 and Fujitsu's RX600 had the same eight-core processors and pulled maximum loads of 835W and 895W respectively.

Although the system on review has a relatively small amount of memory included, the DL580 G7 is still good value and compares well on price with Dell's R910. Storage capacity isn't as high but it has top expansion potential and redundancy plus HP won't be beaten for its classy remote management features.

Businesses looking to replace expensive RISC based systems will find HP’s new ProLiant DL580 G7 is a cost effective Xeon 7500 based alternative. IBM’s x3850 does have some unique capabilities for increasing memory and processor capacities but it costs around twice as much. Storage capacity for the DL580 isn’t as good as Dell’s R910 but HP offers a very good combination of expansion potential, component redundancy and remote management.