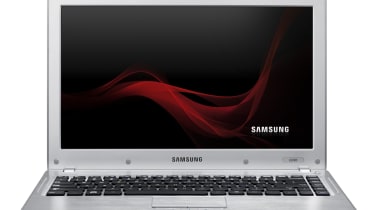 Most ultra-portable laptops achieve their low weight by leaving out the optical drive. This is fine if you don't often need to read or write optical discs while out and about, but if you do, then the lack of an optical drive will be rather inconvenient. The Samsung Q330 has a built-in DVD writer, but still manages to stay slim and lightweight at 2kg. This isn't quite as light as some of the other ultra-portables available, but it's still light enough to carry around easily.

The Q330 looks more expensive than it is due to its slender, silver and black appearance. The lid has a subtle black zigzag pattern that's understated but appealing. The plastic build feels very creaky though and the chassis bends easily when placed under pressure which doesn't inspire confidence.

One of the most important things in a laptop designed for traveling is battery life. The Q330 lasted six hours and 40 minutes when web browsing, which is long enough to last all but the most epic train journeys. It lasted nearly two and a half hours when performing more energy-intensive image-editing tasks. Although we've seen other laptops last even longer, these have tended to be either more expensive, have slower processors or are smaller and lighter models without the benefit of a built-in DVD writer.

Typing is comfortable and accurate thanks to the keyboard's sensible, standard layout and the lack of any small, hard-to-hit keys. However, compared to the best laptop keyboards, the Q330's keys don't have as much travel and don't feel quite as responsive. The touchpad is reasonably large and feels accurate, while the buttons give plenty of feedback when pressed. They feel slightly slippery, but this is a minor niggle.

The Q330 comes with 3GB of RAM which is an odd configuration not commonly seen. Nonetheless, paired with the 2.4GHz Core i3 370M processor it fared very well in our benchmarks. It did especially well in our image editing test with a score of 98. The 320GB hard disk is by no means cramped, but we'd have preferred a 500GB disk as larger capacity models are increasingly common, even in laptops at this price.

As expected for a 13.3in screen, it has a resolution of 1,366x768 pixels. It has a glossy finish which is supposed to enhance brightness. Although it's certainly bright enough for most tasks, it's not as bright as other glossy screens we've seen. The glossy finish has a downside in that it reflects light from overhead sources quite easily this causes glare which can look quite distracting. This is usually easy enough to rectify by simply adjusting the screen or repositioning the laptop, but this may not always be possible so it remains an annoyance.

There aren't any security features, such as a fingerprint reader. We were also disappointed to find that the warranty only provides for collect and return and not onsite service. The only business-specific feature is the choice of Windows 7 Professional which has several useful features such as built-in encryption and a RDP server.

The Samsung Q330 doesn't have many business-specific features, but it does have reasonably long battery life, good Windows performance and a comfortable keyboard and touchpad at an inexpensive price. Although there are ultra-portable laptops with built-in DVD drives that have even longer lasting batteries, they won't be as inexpensive as the Q330. It's a great value laptop.