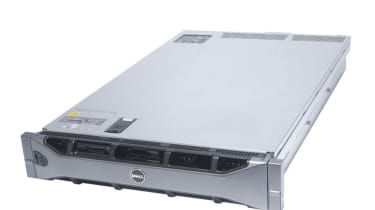 The R715 scores highly as a virtualisation platform for a number of reasons. First up is memory capacity as the server supports up to 256GB of memory running at 1333MHz although a full set of 16GB RDIMMs will set you back over 12,000. If you decide to cut costs don't forget that using cheaper UDIMM memory limits capacity to 32GB and they can't be mixed with RDIMMs.

Boot media support for embedded hypervisors is the best of all the blue chips as Dell sells an optional dual SD memory card expansion board with two 1GB SD cards for a modest 67. Fitted on top of the optical drive, the controller automatically copies the contents of the primary SD card to the secondary one to provide boot media redundancy.

Two hot-plug supplies are supported. Our review system came fitted with a pair of 750W modules. If you go for the high power Opteron 6175SE processors you should fit Dell's 1100W supplies to cope with their 140W TDPs.

The Opteron 6174 processors in the review system have a lower TDP rating of 115W and our inline meter recorded a modest draw of 145W with Windows Server 2008 Enterprise R2 in idle. With all cores pushed hard by SiSoft Sandra this peaked at 344W. Intel's 5600 Xeons aren't so hungry as an IBM x3550 M3 rack server with the same amount of memory and two 2.66GHz X5650s pulled 155W in idle and 280W under load.