All we want for Christmas...

We're a demanding bunch at IT PRO. Here's a run down of what we'd like to find in our Christmas stockings come the morning of 25 December. 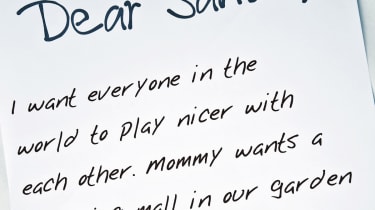 Just as a final stocking filler, both my geeky and childish sides will shine through.

I first saw the Magic Wand Remote Control on Dragon's Den some months ago and fell in love with the device. The idea of running round my house with Mickey Mouse ears, turning up Christmas jingles or switching over to the Doctor Who Christmas Special filled me with more excitement than should be allowed for someone over eight years old.

I was unsure how well it would really work but have been reliably informed it syncs easily to your home devices and is surprisingly sensitive to your gestures.

Come on Santa, I have the glasses. Give me one minute to draw on the lightening scar and it would just be cruel not to give me one of these this year, right?

There is an anti-Apple brigade out there but I'm certainly not part of it largely because of the excellent MP3 players the company has become famous for.

The iPod Touch combines every kind of entertainment I want in one beautiful package. The games are great, it has web access and obviously the music on there will be splendid too. Google Nexus S

I'm currently on a Google Android phone the HTC Desire, so I know the quality of the operating system already. Whilst I'm perfectly happy with the device it is sure to be out of fashion soon given the rate at which things are moving.

Now Google has placed Nexus in the hands of Samsung a proven hardware manufacturer it is sure to be a fine phone. With its speedy processor and two cameras, the Google Nexus S looks like a gorgeous piece of kit that I'd like under my Christmas tree, even if it is just days after its release.

A number of Microsoft products have been bashed in recent times, but there appears to be a general consensus that the Xbox 360 and, in particular, Kinect are great pieces of hardware.

Given I've been away from gaming for a while, this kind of revolutionary product will be a great reintroduction into the sphere. Anything that can both keep me healthy and entertain me in my out-of-work hours has to be a winner and Microsoft's product looks to be the ideal choice.

Being a musician (some shameless self-promotion here for my band) can often be frustrating when you're on your own and there's no one else to make some noise with. Old four-tracks can often be fun, but if you want to get really involved with your songs then you'll want something pro.

You can make your songs, no matter how shoddy, really come alive with Apple Logic Studio. From editing tools to a massive selection of different plug-ins and sound, there is plenty to enjoy. You'll need some time to get used to it all, but once you've tuned yourself in, it opens up a whole new world of songwriting. I've had time to test the water and now remain thirsty for more.

Any reporter on the go wants a decent camera so they can give a really rounded picture of what is going on. There are so many choices though and the range of models and prices can be a little bewildering.

So far I've managed to limit my Christmas camera wishlist down to the Nikon D90 and the somewhat cheaper Canon EOS 300D.