What were the best products of 2010? Our top 10 list contains some surprising and not so surprising winners... 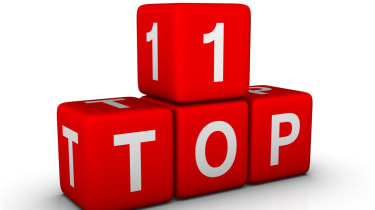 2010 may have been a year of continued economic turmoil, but that hasn't stopped the technology industry from releasing a torrent of quality products. Although it was a little tricky, we've narrowed them down to a list of 10 that we think best shows the innovation of the past year, or are simply the best yet in their respective categories.

It may be an obvious choice, and perhaps even a controversial one, but Apple's tablet computer deserves to be on this list. Whatever you think of Apple's 9.7in multitouch iPad, its influence is undeniable it's inspired a legion of rival tablets and its popularity may even be affecting sales of netbooks and laptops.

We expect to see not only more rival tablets in 2011, but also an updated iPad 2, so the iPad's influence will continue to be felt.

Read our full review of the iPad here.

This is the last Apple product in this list, we promise. Macs are perhaps even more divisive amongst IT professionals than the iPad. There's no denying that the latest MacBook Air is an excellent ultra-portable laptop though. Not only does it look and feel great, it has a comfortable keyboard, a bright, high resolution screen and, most importantly, incredibly long battery life in a slender and lightweight design.

It's now the standard by which all other ultra-portable laptops will be judged.

Read our full review of the 13in MacBook Air here.

It may not be the most glamorous product in the world, but we all need an office suite to get some work done and Microsoft Office 2010 remains the best of the bunch. OpenOffice is a good alternative, especially if your budget is tight, but for almost guaranteed compatibility, even with the most complex documents, Microsoft Office remains a must-have. Its Ribbon interface is especially appealing to inexperienced users.

Read our head-to-head comparison of Office 2010 and OpenOffice 3.1 here.