It's a tablet! It's a netbook! But is it any good? No, not really. Read on to find out why. 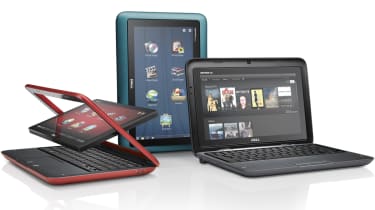 Like most other modern netbooks, the Duo is equipped with a dual-core Atom N550 processor. However it also has 2GB of RAM, compared to just 1GB on most other netbooks. The extra RAM makes a noticeable difference in performance, from basic everyday tasks such as switching between multiple programs to more demanding work, such as editing photos.

There are two USB2 ports and a combo headphone/microphone port protected from dust and grime by rubber flaps. Oddly, these are the only ports on the Duo, besides the socket for the battery charger. There's no memory card reader, Ethernet port, Kensington slot or video-out port for connecting a monitor or projector. A desktop port replicator with a memory card reader and a 10/100Mbit/s Ethernet ports is available though, but it too lacks video-out. The lack of video-out limits the Duo's usefulness if you need to give presentations on the go. The lack of a Kensington security slot will concern security-conscious users. These omissions are especially unusual since there appears to be more enough room on the Duo to accommodate them.

The touchpad is accurate and reasonably large, but we'd prefer the buttons to be raised at a higher angle to make them easier to press. The keyboard feels responsive, but the slightly undersized keys means typing errors are easier to make than on other netbook keyboards. It took us a little time to get used to the keyboard before we could type quickly and without errors, although this could be trickier if you have large fingers.