An Android smartphone that converts into a laptop with access to a virtualised Windows 7 desktop? We're intrigued, very intrigued. 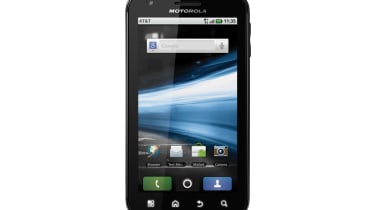 The oddly-named Atrix is the latest Android smartphone from Motorola. It's one of the first smartphones to have a dual-core Nvidia Tegra 2 processor, but it still runs Android 2.2 rather than 2.3. Nevertheless, it's packed full of interesting and exciting new features beyond headline-grabbing specifications.

A dual-core processor might seem like overkill for a smartphone, but Motorola has put it to good use. As well as being able to play 1080p high definition video when connected to a TV, it can also be used as a substitute for a laptop. When connected to a TV or monitor over HDMI using a mains-powered dock and paired with a Bluetooth keyboard and mouse, the phone switches into a Linux mode. Separate from Android, it has a traditional and familiar point and click interface with a Mac-style taskbar, overlapping windows, a full version of Firefox and a media centre app.

It's also possible to use this 'webtop' mode on the go by plugging the Atrix into a laptop-shaped dock. It has a keyboard, touchpad and 11.6in 1,366x768 pixel resolution display, as well as two USB2 ports. There's no extra storage or processor besides the phone's Tegra chip, 16GB of built-in storage and any microSDHC cards that you have inserted into the phone.

We weren't able to confirm whether the laptop dock has a secondary battery, but we suspect that it does otherwise the Atrix's battery would be quickly depleted by the 11.6in screen. Although there are two USB2 ports and a power socket, there's no Ethernet port, memory card reader or Kensington security slot so it won't be a complete laptop replacement for some people.