The Motorola Xoom, the first Android 3.0 Honeycomb tablet, has finally been revealed. Should Apple be worried? We took a closer look. 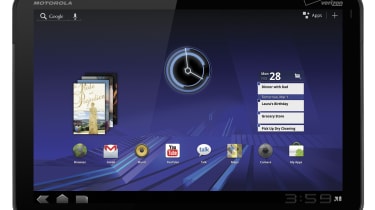 The Motorola Xoom is the first Android 3.0 Honeycomb tablet to be announced and we managed to get a sneak peek at the eagerly anticipated slate at Motorola's preview event in London.

At just 740g, the Xoom is heavier than the Samsung Galaxy Tab but is around the same weight as the iPad. It uses the same Nvidia Tegra 2 processor and 1GB of RAM as Motorola's new Atrix smartphone. Motorola claims the 10.1in screen has a resolution of 1,280x800 which sounds a little odd to us we'd expect most screens of that size to have a resolution of either 1,024x600 or 1,366x768.

Thanks to Android 3.0, the Home screen looks disorientating and different if you're used to an Android 2 smartphone but it actually has most of the same user interface elements you'd expect. A taskbar of favourite apps runs along the bottom of the screen, while a Search field and a button listing all the installed apps run along the top. In the middle are widgets which have been redesigned to take advantage of the extra screen resolution. For example, the GMail widget includes a scrollable Inbox list while the Calendar widget lists your appointments for the day.

Many of the bundled Google apps have also been tweaked to make the most of the Xoom's large screen. The web browser has desktop-style tabs and the Incognito privacy mode familiar to Google Chrome users. The YouTube app lists videos on a scrollable 3D wall similar to the Top Sites feature in Apple's Safari web browser. Google Maps now has an optional 3D mode showing the outlines of buildings on streets in over 100 cities including Birmingham and Cardiff, but oddly not London at present.

GMail now shows your list of labels and the contents of your inbox simultaneously in two separate panes. Tapping a message shows a preview of the message alongside the contents of your inbox or selected label. Android 3.0 still has separate apps for GMail and other email accounts, such as Exchange, so we weren't able to see if Exchange users will be able to take advantage of this expanded user interface.