Winfrasoft provides Microsoft powered security appliances with a difference as it uses Tier-1 hardware platforms. Is this enough to make them the best choice for running Forefront TMG 2010? Read this review of the 9500-DE Gateway Appliance to find out. 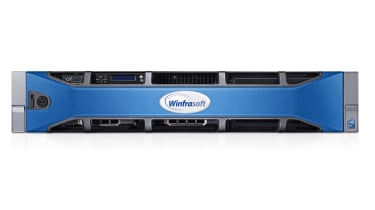 Standard features are extensive as TMG has Microsoft's ISA Server 2006 at its foundation which provides an inbound and outbound security gateway with IPsec VPNs, forward and reverse web proxies and web caching. TMG builds on these by adding an SPI firewall, HTTP and HTTPS inspection as standard and the NIS (network inspection system) which scans traffic for specific Microsoft exploits.

Wizards help create firewall policies which can contain multiple rules using source and destination networks or hosts, allow or deny actions, protocols and AD groups and users. We recommend deploying the TMG agent to clients as this configures the host's proxy settings and provides enhanced logging and HTTPS inspection notifications.

We did come across one issue although, to be fair, this isn't Winfrasoft's fault. Microsoft's TMG SP1 update screws up the reports so they appear to be blank. Winfrasoft provided us with a script fix from Microsoft but it advised this won't be fully sorted until early this year.

Another reporting problem is TMG still uses the Dailysum utility from ISA Server which can only run once a day so you can't see reports on current activity until the following day. We also discussed this with Winfrasoft which said it was currently looking at offering a third party reporting tool to improve on the features offered by TMG.

You can add anti-virus scanning and URL filtering to TMG but these are optional and require a separate subscription to Microsoft's Web Protection Service. Costs will depend on your current Microsoft support agreements, but we think they are well worth having.