We take a sneak peek at Dell's latest Android tablet - the 7in Streak. 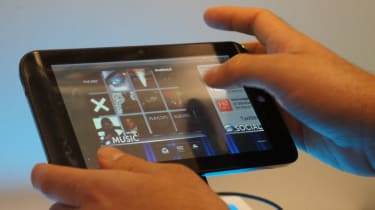 The Dell Streak was one of the very first Android tablets, but we found that 5in model to be disappointing on many levels. Dell has been showing off a newer 7in version of the Streak and we managed to get a sneak peek.

Its biggest selling point is the processor, the dual-core 1GHz Nvidia Tegra T20. We put this to the test in a range of uses playing Asphalt HD, watching high-definition YouTube clips, even giving Angry Birds a quick spin and it came through with almost flying colours.

The 'almost' stems from a bit of jerkiness in a couple of more intense sections of the driving game, but hopefully this will be smoothed out with future updates.

Dell promises just such an update when Android 3.0 comes, with the Streak 7 currently running Android 2.2. That means it includes support for Adobe Flash Player 10.1, and when we viewed a Flash-based video hosted on www.itpro.co.uk it worked perfectly.

Physically, it looks like an enlarged version of the original Dell Streak. Unlike the original model, you can't easily replace the Streak 7's battery. However, since this is a massive 2,780mAh unit we suspect this won't be a problem in every day use. We expect the Streak 7 to have excellent battery life.

It is possible to quickly replace the SIM and microSD card though: these slots are hidden underneath a small strip of plastic on the right-hand side of the device.

The front is dominated by the 7in screen, which uses Gorilla Glass to protect it the same material is used on the iPhone 4 and the Google Nexus S. While that's great to see and the Streak 7 feels well-built as a whole we're not fans of the screen itself.

The main reason is the amount of grain on show. While the Dell Streak looks sharp with a 5in diagonal and 800 x 480 display, you can see individual pixels on the Streak 7. And that's because, very disappointingly, it has the same 800 x 480 pixel resolution of most high-end Android smartphones.

For us, that alone is a reason not to get too excited about the Streak. It feels like a minor revision of the existing Streak rather than an entirely new model - a missed opportunity. UK pricing and availability have yet to be confirmed.

Although we'll reserve final judgement until we see a final shipping version, our first impressions of the Dell Streak 7 are decidedly mixed - if only because of its large yet low-resolution screen.