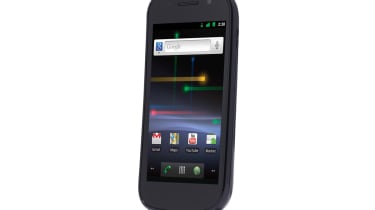 Applications ran very smoothly thanks to the 1GHz Hummingbird processor. Unlike some of the other Android smartphones we've seen, we didn't notice any significant lag when pinching to zoom or the slightly-wonky inertia when panning and zooming. 16GB of storage is built into the phone. Unusually for an Android phone, there isn't a memory card slot for adding more.

Oddly, the order of the four touch-sensitive Android buttons isn't consistent with any other Android phone we've seen, which may be slightly disorienting for experienced Android users. We'd also prefer physical buttons rather than touch-sensitive ones, since they're harder to press accidentally.

Android 2.3 is a fairly minor update, but it still has some noteworthy new features. As well as support for the dual cameras and NFC chip already mentioned, it has a refined interface with small but worthwhile improvements such as easier to read icons in the status/notifications bar and various new animations sprinkled throughout the interface.

For Exchange users, the email app can now respond to a meeting request and add a meeting to the Calendar app. The keys in the standard Android keyboard are now wider and better spaced apart, making typing easier. However, users of phones with third-party interfaces, such as HTC Sense, may already have access to some of these improvements.