Is there any point in having Android on a netbook? Read our review of Acer's latest Aspire One netbook to find out. 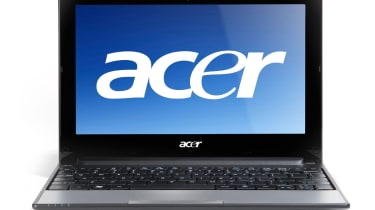 Netbooks have always come preloaded with an alternative to the dominant operating system on larger, more powerful computers. In the case of modern netbooks, this has tended to be Windows 7 Starter which has fewer features than the other, more capable versions of Windows 7. However, Acer's latest netbook not only comes with Windows 7 Starter, but the smartphone operating system Android 2.1 as well.

The Aspire One boots into Android almost instantly compared to the 30 seconds or so it takes to boot into Windows 7. Unfortunately there are currently few other advantages to using Android on the Aspire One. Since Acer's netbook hasn't been authorised by Google, the Aspire One doesn't come preloaded with the Android Market, making it trickier to install third-party Android apps.

Also missing are most of Google's own Android apps. This is a serious omission for most business users, since this means Google's Exchange-capable email and calendar apps are missing. Acer has also made little effort to adapt the touchscreen Android operating system for use with a keyboard and touchpad. There's little support for keyboard shortcuts, Android apps can't be mirrored onto a connected monitor or projector and there's no system-wide printing, for example.

A Windows Explorer-style file manager app has been added to make it easier to find your files. There's also a version of Firefox preinstalled, but both its interface and its speeds at rendering web pages feel sluggish compared to Android's usual WebKit-based browser which is still available. These apps are poor substitutes for full and easy access to the Android Market. Despite Acer having included Android 2.1, all these limitations make it feel like an older, less capable version such as 1.6.