Can IT make up for public sector job cuts?

As the Prime Minister pushes enterprises to provide more private sector jobs for UK workers, Paul Briden investigates whether the IT sector can help make up the shortfall in employment. 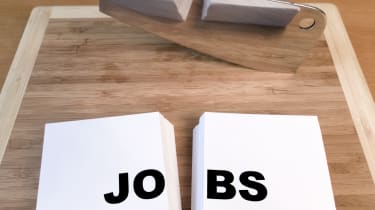 David Cameron held meetings on Monday with top industry executives to discuss the future growth of the UK's private sector.

The Prime Minister was seeking pledges from major companies to create more British jobs, encourage economic growth and to counter the losses in the public sector caused by substantial Government cuts.

Cameron also claimed to be interested in learning from big businesses how they thought the Government could help them offer more jobs during the 'age of austerity'.

So far from the IT industry only Microsoft has been forthcoming with a commitment to create more vacancies.

Gordon Frazer, managing director of Microsoft UK, said: "In 2011, Microsoft expects its Britain Works programme to generate 4,000 new jobs, in addition to the 9,000 new jobs created since launch in 2009."

He explained the scheme in more detail, adding: "Firstly it creates new jobs in the form of highly skilled apprenticeships and opportunities for entrepreneurs to start new businesses. Secondly it provides IT training to give people the right skills for existing vacancies."

Cameron will likely have been hoping for more on paper from other major players in the industry, but global competition could well be an issue. In the face of economic hardship, many countries are trying to entice IT companies which they recognise as part of a sector with high potential to stimulate growth, particularly as IT is instrumental to the success of virtually all other business.

Bob Tarzey, an IT industry analyst with Quocirca, felt the UK had the potential to make a great deal of headway in IT and described the impact from Government cuts as a "short-term problem."

Tarzey quoted figures predicting 2011's global growth in IT at 4.6 per cent. He believed the UK industry could form a significant part of this global climb.

"The IT industry has a massive role globally in 2011 and beyond, it plays a major part in driving business in the UK," he added.

Tarzey was keen to emphasise the positive outlook for British IT, citing the recent deal between Microsoft and UK firm ARM.

"People forget what a leader the UK is in IT security with companies like MessageLabs and SurfControl which have all been breaking ground and establishing leadership. Many may now be American owned but the innovation started here," he said.

Tarzey explained even the manufacturing side of IT might begin to prosper in the UK, claiming some companies were finding the costs of shipping parts to the Far East for assembly and back again were becoming prohibitive. Such instances might encourage home-grown IT companies to repatriate their manufacturing operations to the UK, creating many new jobs in the process.

Andrew Bartels, a US-based analyst for Forrester Research, agreed manufacturing might go in the direction as predicted by Tarzey but was sceptical about the extent.

When a manufacturing sector declines it's hard to bring it back, it takes time to rebuild," he said. "An area in the UK which is more resilient is software which is currently looking healthy."

Unfortunately for Cameron his push for a commitment to try to boost Britain's economy comes at a time when some sectors of the industry are at their most hesitant.

The video games industry is currently reeling from the abolition of the video games tax relief by George Osborne's emergency budget, leaving a very real risk Britain could see talented developers migrating from our shores to the many other countries actively encouraging games companies.

Activision Blizzard, developers of best-selling game Call of Duty, appeared on the pages of the Telegraph at the beginning of the year, where chief executive (CEO) Bobby Kotick implied the UK could lose out as other countries were becoming a more attractive prospect for developers. He went on to describe the removal of tax breaks as "a terrible mistake."

Video game trade body TIGA believed the reintroduction of the tax break would create 3,550 graduate jobs. There is the possibility without such breaks the UK games industry could decline significantly with investment having already fallen in the last two years from 458 million to 417 million, according to TIGA's figures.

When asked to comment, Tarzey said: "It's up to the Government to create a corporate friendly environment by implementing a good tax regime. It can be difficult to appeal to voters while catering for business with these kinds of tax incentives and depends on what the public finds attractive."

"I think hi-tech industry could get away with tax breaks, it's something the public could be in favour of but in the case of removing the video games tax breaks I feel the government has made a mistake."

The Telegraph columnist Paul Carr made an uninhibited analysis of the state of the European and British IT industries in a recent article where he claimed the lack of originality and abundance of US-imitators has meant startup investment was at its lowest in a decade.

He suggested the UK industry needed to get creative, look at what it could do better than the US and then develop in a new direction.

However, his recent meeting has gained more support.

Asked about Microsoft's contribution Tarzey said: "The Microsoft announcement is good news for the UK. Many of these jobs are going be apprenticeships in IT, which is exactly the antidote needed to the likely shrinking of the higher education sector as fees rise."

"[It is] better for companies to be training people in the skills they need and providing hands on experience, than encouraging the continual growth in the number of students doing what, for many, will be dead-end degrees. Apprenticeships produce required skills and the Microsoft Britain Works initiative will help underpin the growth the government hopes for in the UK IT industry."

Recent information released by KPMG and the Recruitment and Employment Confederation (REC) could indicate a positive change has already started.

According to the company's figures, the demand for permanent IT staff is growing and increasing at its highest rate for the last four months. The survey also revealed IT staff were in high demand when compared to other sectors, also seeing high levels of growth in employment, as well as salaries starting to rise.

Bernard Brown, partner and head of business services at KPMG, own analysis went some way to supporting Tarzey's assessment.

"The latest data suggests again that the UK job market is on the road to recovery," he said. "A look at the sectors indicates that the private sector is mainly responsible for the overall positive picture."

"While demand has been strong, we are entering a critical phase for the UK job market, the government cut backs in public sector spending and employment should start to bite over the coming months, and the impact of the recent VAT increase may begin to affect UK consumer demand and job creation."

Bartels said the UK was going through a period where IT was growing more successfully than the economy as a whole. However, that was reflecting the current trend rather than future prospects.

"Budget cuts will impact IT because of the relative size of the Government sector," he said. "We'd expect to see the Government IT sector either flat or down from what it is."

He added: "We're expecting to see growth in the private sector, including manufacturing, as being above average 2011 growth in IT will be a bit better than GDP in the UK which will grow to 4.5 per cent, whereas the IT market will grow to around eight per cent."

"We are expecting the IT market to be around 7.7 per cent in 2012 with faster growth in the private technology sector."

"In situations where governments have gone for fiscal tightening if we look at what history tells us I think in general the private sector will not offset losses in the public sector, but the tech industry is an exception and I think it probably will," he said.