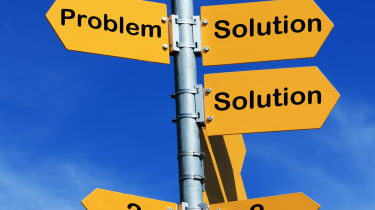 Apple's products create mixed emotions among users. Fan bois will seemingly do and say anything to protect their beloved gadgets and gizmos, while the haters' will do seize any opportunity to be dismissive. Of course, many will simply sit on the fence, too. The unarguable point being that the company makes some pretty sexy kit.

"There have been other high profile CEO's such as Scott McNealy and Bill Gates. They're useful because they're often very good at presenting a media image and they can represent a company ethos summed up by an individual," he said.

Conversely, having such large personalities as figureheads can also be problematic, according to Bamforth. This becomes particularly difficult when these people attempt to "pass the baton" for any reason.

"It's a problem companies face as they go through growth cycles from one person's baby to a successful organisation," Bamforth added.

Tech industry blog Technicism summed the confidence problem up neatly, saying "To many people Apple is Steve Jobs," describing him as having a "crucial role in vetting the company's forward-looking designs."

Others take a different view. Speaking in an interview with Reuters, Shaw Wu, analyst for Kaufman Bros, said: "The way Steve thinks, his methodology, his sense of style: frankly, a lot of it has been ingrained into the Apple culture."

Likewise Ben Wood, head of research at CSS Insight, told the London Evening Standard: "Apple is clearly a much bigger company than one person."