Finally, a pocket-sized projector worth buying. 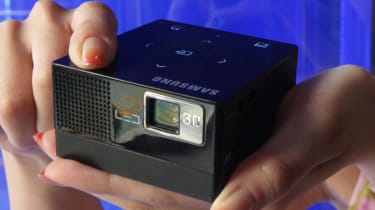 Most of the pocket-size projectors we've seen so far have had serious flaws that prevented us recommending them. However, Samsung's latest attempt, which is around the size and weight of a Rubik's cube, goes a long way to making a pico projector a credible option.

Unlike some of its competition, the SP-H03 has a battery. This means you don't need a second power supply if you're hooking it up to your laptop to make a presentation. The battery lasts around two hours, so should be enough for at least a couple of meetings before you have to connect the power supply.

Another highlight is the built-in media player, which means you don't even need a laptop to show a PowerPoint slideshow, some photos or a video. The 1W mono speaker is surprisingly loud, and is good enough for the odd promotional video soundtrack, but you wouldn't want to use it for a feature-length movie. The media player has a music section, but we can't see many people using this.

As well as PowerPoint decks, the SP-H03 supports a wide range of formats including DOC, XLS and PDF (plus the Office 2007 variants) but oddly not RTF. Plus, it can handle plenty of video formats including MKV, M4V and MP4. It played some of our MP4 test files, but not others. While you won't have to re-encode most videos for the SP-H03, you will have to resize photos, at it can't handle JPEGs over 1,200 pixels wide.

The media player interface looks slick, and you can also play files from microSD cards up to 16GB and USB flash drives of any size. Unfortunately, but not unsurprisingly, it doesn't support portable USB hard disks. Our test disk refused to work at all unless we plugged in the SP-H03's power supply, and even then, it would play only the first few seconds of videos.