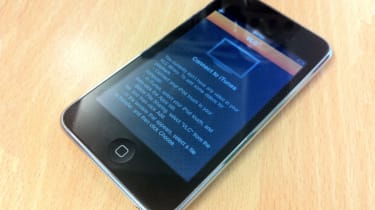 What the Results Mean

The results of our battery life tests took us by surprise, so much so that we reran them just to be sure. The iPod Touch actually had slightly longer battery life when playing Flash videos using VLC, than it did when playing H.264 using the same app.

However, when playing the H.264 video using Apple's Videos app, the battery lasted considerably longer than the VLC app playing either H.264 or Flash. Either Apple's in-house app developers are very good (or have access to some trick or a private API for prolonging battery life) or Applidium, the developers of the VLC app, still have a lot of work to do.

Samsung claims a seven hour battery life for the Galaxy Tab when playing video and our tests results largely validated this claim. The battery lasted just under seven hours when playing our H.264 video, but half an hour less when playing the Flash video. However, this half hour difference is far smaller than the one hour and 15 minute difference on the iPod Touch between the VLC Flash times and the H264 native Videos app times.

The results of our tests with both an iOS and an Android device broadly support Apple's assertion that a mobile device's battery can be depleted more quickly when it's playing Flash video instead of H.264 video. However, the results of our tests also show that this difference doesn't have have to be a huge one.

Even so, we remain doubtful that Apple will now cast aside its objections to Flash and work with Adobe to bring it to iOS. Besides battery life, one of Jobs' other concerns about Flash in his open letter was performance and we also discovered that having Flash Player installed on the Galaxy Tab could severely impair the responsiveness of its touch interface.

Despite all of this, we doubt our tests will remain the final word on the issue of Flash and mobile battery life. Adobe states that the upcoming Flash Player 10.2 for desktop operating systems will have greatly improved hardware acceleration for shifting the burden of video playback from the processor to the graphics card which, on a mobile device, could improve battery life. It'll be interesting to see if the next generation of Flash-capable mobile devices, such as the RIM Playbook or the Motorola Xoom, will come with a version of Flash Player 10.2.