A handheld projector for just £162 - a bargain or a false economy? Jim Martin takes a closer look in our review. 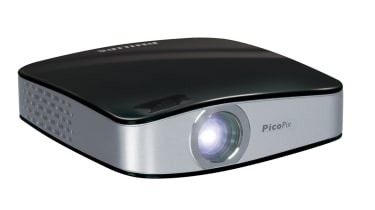 Handheld projectors have been around for several years, and Philips' new PicoPix is a third-generation LED-based device. With a rated brightness of just 20 lumens, it isn't the brightest we've seen, but is just about on a par with its competition, including Samsung's SP-H03. Although the resolution is relatively low at 800x600, it's a step above most pocket projectors. The PPX1020 is convenient, too, since it requires only a USB cable for power and data.

It's about the size of a coaster and only 22mm thick. There's no keystone correction, which is odd considering the flip-out foot for raising the front up slightly. The resulting image is only marginally skewed, but you're better off attaching it to the bundled mini tripod using the screw mount underneath since most tables or office desks are too low to project an image high enough.

Unlike the Samsung SP-H03 and other pico projectors that have a DMD (digital micromirror device), the PPX1230 has a Liquid Crystal on Silicon (LCoS) chip. It relies on the same red, green and blue LED light source which cycles quickly between the three colours to create the impression of a full-colour image.

Unfortunately it isn't quick enough, and the resulting rainbow effect was the worst we've seen from any projector. It wasn't noticeable just in high-contrast scenes (where many single-chip DLP projectors show their weakness), but also occasionally in full-colour images. This became highly irritating and the relatively slow cycle speed also made the image appear to flicker.

Colours were very oversaturated, and as there are no image controls whatsoever, there's nothing you can do about this. Although you're unlikely to notice it, the backlight is uneven and our test unit had a bright spot in the top-right corner.