Smartphones: Satellites at half the price?

A new experiment is testing whether smartphones could be the cheaper alternative to pricey international satellites. Alvaro Guzman talks to the academic behind the research to find out more. 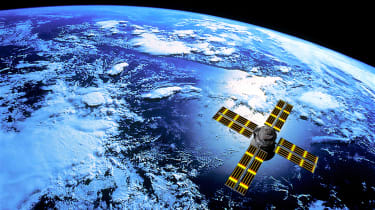 It all started with Laika. Shamefully, she couldn't tell the world how she felt after the Russians sent her into space as the first crewmember of Sputnik 2 in 1957 due to her early demise, as well as her being a stray dog.

Her pioneer experience, though, paved the way that other adventurers soon followed.

A way that was taken by Neil Armstrong and the Apollo 2's crew. A way that seemed to be abandoned by both the Americans and the Soviets after the cold war came to an end. A way that's now about to be picked up again, this time by a group of British engineers.

They're doing it their way, though.

The protagonist of the mission won't be a street dog, nor an astronaut from Ohio, but rather a mobile phone. It will be, like the instigators and organisers of this adventure like to say, a Smartphone Satellite.'

Specifically, a satellite containing a smartphone payload is being prepared to be sent to space. Officially named STRaND-1, the satellite (also known as Surrey Training Research and Nanosatellite Demonstrator) is being developed by Space Researchers at the University of Surrey, in collaboration with Surrey Satellite Technology Limited.

Although the exact model has not been disclosed yet, it is known the phone will run with Android's operating system - a nice boost for Google.

The phone will have to undergo a lot of different pressures in its incredible journey though.

The immense vibrations that will occur during launch will be followed by a period where the satellite will go from sunlight to eclipse conditions around the Earth multiple times. This will cause the device to undergo extreme temperatures, both cold and hot.

The research, lead by Dr Chris Bridges, is also concerned about the vacuum effects and the radiation effects every excursion beyond the stratosphere entails.

"We have tested the temperatures, the vibration as well as the vacuum effect," Dr Bridges told IT PRO. "It is the radiation that we are testing now. And we should have results within a couple months".

STRaND-1 is a joint venture between both the SSLT and the University of Surrey which has two main objectives: Facilitating research and hands-on training for new engineers and challenging some of the space navigation industry's standards and processes.