A big-name business PC with a six-core processor. Unfortunately, Kat Orphanides isn't very impressed - read on to find out why. 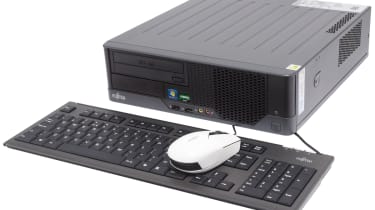 When you're kitting out an office, particularly if multiple PCs are required in a single purchase, there are certain standard requirements: reasonably small space requirements, low power consumption and a specification that will continue to be fit for purpose for a typical two-to-three-year amortisation period.

Fujitsu's Esprimo E5646 is a smart looking and compact PC. Measuring just 10x330x375mm, it's somewhere between the size of a miniPC and that of an old-fashioned tower. Fujitsu has actually used a desktop case, rather than the now-ubiquitous tower design, and it's sturdy enough to put your monitor on if you need to save desk space.

Unfortunately, its compact size is matched by a meagre specification. The E5646 is horrendously underpowered for its 625 price. The processor - a six-core AMD Phenom II X6 1035T - is lodged firmly at the bottom of AMD's hexacore processor range, with a clock speed of 2.6GHz. This is visible in our benchmark test results - with an overall score of just 105 it's not much faster than most quad-core PCs. That would be fine if the Esprimo cost less, but most PCs at this price are far more powerful this we'd expect to see at least a Core i3 processor, rather than the Esprimo's sluggish Phenom II X6.

One consolation is that this selection of components is fairly power efficient, if nothing else. We were pleased with the E5646's power consumption; it uses no measurable power when in sleep mode and just 54W when idle on the desktop.

Space is limited if you want add or upgrade components at a later date, but it's not as restrictive as many other compact PCs we've seen. The E5646 comes with a 4GB of RAM and a 64-bit version of Windows 7 Professional to take full advantage of it. There's room to expand that to a maximum of 16GB of memory and it also has a 1TB hard disk, plus room for one more.

There are two PCI Express x16 slots - which you can use for any PCI-E card - and two PCI slots, but the case is only big enough to take low-profile expansion cards. The integrated ATI Radeon HD 4200 graphics chip is good enough to display your awe-inspiring presentation videos in Full HD, but if you want to kill some time, it's strictly casual gaming with this graphics processor.

There are just USB2 ports on the front and another six at the back. You can connect a monitor using either DVI or DisplayPort. There's even a serial port and a pair of PS/2 sockets, just in case you ever need to connect legacy peripherals. The supplied Fujitsu keyboard is actually rather pleasant to use. It feels slightly spongy, but the positioning of the flat keys was conducive to fast, comfortable typing. The USB optical mouse is small, basic and does the job.

Despite its expandability and fairly well-made peripherals, there’s little to commend the Esprimo E5646 over any other business system in the same price range. Even its warranty - one year collect and return - is distinctly poor compared to the three-year guarantees offered by the likes of Lenovo. In fact, Fujitsu could learn a lot from Lenovo’s example. We recently impressed by the Lenovo ThinkCentre M90p. It doesn’t have much space for much expansion, but it really doesn’t need it, as the M90p already has a an excellent specification, built around a powerful 3.33GHz Intel Core i5-660 processor, with 4GB of memory and an easily upgradable, if less spacious, 500GB hard disk. On top of being more powerful than Fujitsu’s E5646, it has a much longer warranty and a slightly lower price.