Broadberry’s latest CyberServe X34-Q104 is the first product to combine four independent servers in a 1U chassis. This is an impressive feat, but are there compromises in the search for ever greater compute node density? Read this review to find out. 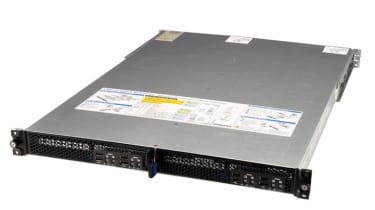 The one feature we didn't like was the basic Matrox G200 video chip on each node. These only have 32MB of video memory and support a cramped maximum resolution of 1024 x 768 which is a real pain for local management.

From the appearance of the motherboards you wouldn't guess they were two independent nodes, but a glance at the back gives the game away. The rear panel for each tray has a complete set of ports, comprising monitor, dual Gigabit Ethernet, dual USB2 and remote management sockets, for each node.

The tray's front panel has power and ID buttons for each node, along with LEDs for network activity and warnings, plus two more USB ports. We found having four USB ports per node really useful as we could leave the keyboard and mouse plugged in even if we wanted to use a USB flash drive or other such storage device.

Each tray has its own 450W cold-swap power supply. When you remove a tray the supply stays put, but if you need to replace it, the unit can easily be withdrawn from the rear.

The server also has power frugality as a key focus and our power tests confirmed what a miser it is. As we brought each node online we took measurements with them running in idle and with SiSoft Sandra pushing all cores on each one to near maximum utilisation.