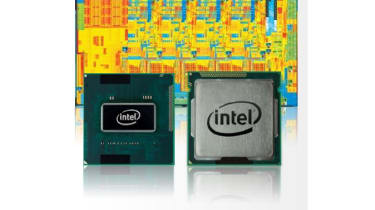 Part of the need to redesign the socket is due to the integrated graphics unit of a Sandy Bridge CPU. Unlike the older Clarksfield and Clarkdale processors which combined separate GPU and CPU dies in a single processor package, Sandy Bridge unifies both units in a single silicon chip.

Intel has added more capabilities to its newly named Processor Graphics (PG) units, but mostly for media playback and encoding. This means that laptop makers won't need to add a third-party graphics chip to laptops just to enable HD playback, which should lead to smaller, thinner and cheaper laptops. The Intel Wireless Display (also known as WiDi) allows wireless connections to screens, which might be useful for travelling professionals who need to give a lot of presentations.

An interesting quirk of how Intel has integrated the PG into the Sandy Bridge design is that it shares the highest-level cache of the processor, allowing it access to this super-fast temporary data store. This should speed up GPGPU tasks such as the GPU-accelerated video encoding, but we don't see a huge benefit if you're just using the PG to display a Windows desktop. There's also the risk that the PG will steal some valuable cache from the CPU cores.

Sandy Bridge motherboards come in two flavours: P67 and H67. You'll need a H67 motherboard to enable the PG which can support up to simultaneously connected displays. If you need to connect more than two, then it's probably worth opting for a PC with a P67 motherboard, which shouldn't cost any more than their H67 counterparts, and a dedicated graphics card instead. These chipsets are also Intel's first to include SATA 6Gbps support for super-fast SSDs, but that's of little consequence to most people.