The Pro 2000 from CronLab is touted as a fire-and-forget anti-spam appliance with top detection rates. We put it through a barrage of live tests in the lab to see if it lives up to the hype. 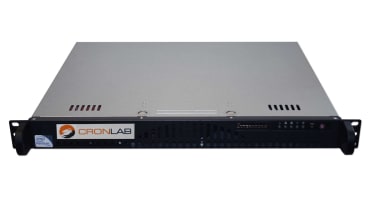 The appliance recorded a total of 1,644 clean messages, whilst detected spam totalled 354 with a further 32 messages placed in the quarantine area for inspection and subsequently released. In total, only 22 spam messages were not picked up giving CronLab an impressive overall detection rate of 99.1 per cent.

The web interface is very intuitive with its home page providing a simple but clear overview of mail activity. A large pie chart shows a breakdown of all messages going through the appliance and a table alongside can be set to show the numbers for the past month or week.

The status of your CronLab subscription is displayed below and you can keep an eye on appliance utilisation. Three real-time graphs are provided that show system load and temperatures, hard disk usage and the size of the mail queue.

The appliance is reasonably well-endowed in the hardware department. Our only other criticism is of the chassis as it uses an incredibly loud blower fan for cooling which became very annoying in the lab during testing.

That aside, we were impressed not just with the ease of deployment, but with how little we had to do during the test period. The Pro 2000 is capable of delivering a high spam detection rate and doesn't need a babysitter as all main administration tasks are fully automated.

We can’t fault CronLab on its claims as we found the Pro 2000 easy to deploy and capable of delivering top spam detection rates. The appliance hardware isn’t the best choice and it is more costly than similar products from Barracuda, but if you want an anti-spam appliance that virtually looks after itself then the Pro 2000 is well worth considering.