Are three monitors really better than one? David Ludlow takes a closer look at the bigger picture in our review of Samsung's latest monster monitor. 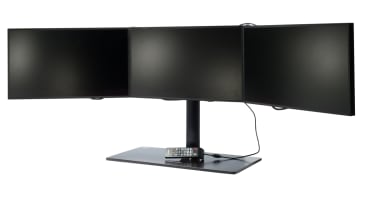 Whether it's for monitoring multiple servers or because an employee has a complex project to work on, there can be clear advantages to having three or more monitors. While two monitors will generally fit on a normal desk, go to three and it's a different issue.

For three displays a dedicated system, such as the Samsung MD230X3 could well be of interest. It's a complete multi-monitor setup consisting of three Full HD 1,920x1,080 23in screens attached to a single mount.

The screens are all daisy chained together so that they can all be powered by a single power cable. Doing this requires connecting the power cable to the primary monitor and running daisy-chained leads to the other two displays. It cuts down on the number of power sockets you need. Power consumption of 119W for the three displays is about what we'd expect for three 23in CCFL-backlit monitors, as is the 3W standby power; LED models would reduce power consumption even further.

The other difference between this and buying three monitors separately is that the monitors are all controlled by a single USB remote. This plugs into a USB port on the rear of the displays and, as with the power, you must daisy chain the two other displays.

A single remote control for all of the displays is a brilliant idea. It lets you control each display individually or you can access the menus simultaneously. Selecting the monitor you want to control is simple. First, you set the ID on each display using the button on the back, then you press the corresponding button on the remote. With no controls on the monitors themselves, it means that the bezels are thinner and the monitors sit closely together.