The cases will continue, as claimants are given a timeframe in which to make applications in the case or discontinue the cases properly 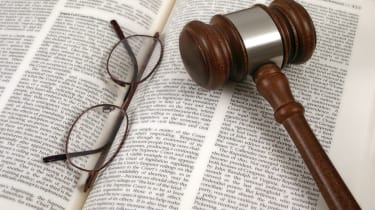 Judge Birss QC confirmed the cases have been stayed, saying the notices of discontinuance were an abuse of the court's processes.

Earlier this month, it emerged both MediaCAT and ACS:Law had shut down and wanted the proceedings, which they initiated, to come to a close.

ACS:Law courted controversy after it sent letters to people it suspected of illegal filesharing, asking recipients to pay hundreds of pounds or risk being taken to court.

Just 27 cases have been brought to court despite thousands of letters being sent out.

Last month, the law firm chose to stop sending letters after Andrew Crossley, head of ACS:Law, said he had received death threats and had his email hacked.

Just two of the copyright holders have been identified Sheptonhurst and Darker Enterprises.

Claimants have until 22 February to make applications in the cases or attempt to discontinue the cases properly.

If they fail to do so then the cases against the defendants could be struck off, Judge Birss explained.

If no additional applications have been by the claimants, the case will resume on 16 March, when the first stage of applications for wasted costs on behalf of the defendants will begin.

Barrister Guy Tritton, acting on behalf of the defendants, said the accused wanted to have matters dealt with as soon as possible.

"What we don't want to do is have this in a state of limbo in perpetuity," Tritton said.

Judge Birss agreed the defendants "don't want to be left hanging around."

Tritton also raised concerns that although ACS:Law had folded, Crossley would return "in another guise" and launch actions against the alleged file sharers.

Furthermore, he said the defendants wanted to have the matter of costs addressed as soon as possible.

Applications for wasted costs orders on behalf of the defendants, represented by the national law firm Ralli, were sent to the court last month.

Michael Forrester, from Ralli's intellectual property and IT law team, said his firm had dealt with cases where consumers complained of being pursued even though they were sure they had not downloaded copyright protected material.

"It can be incredibly upsetting for people to receive these letters and they may well have a claim in harassment, so I am urging them to come forward," Forrester added.