Rugged and packed with the latest chips from Intel - we get a hands-on preview of Dell's latest Latitude business laptop. 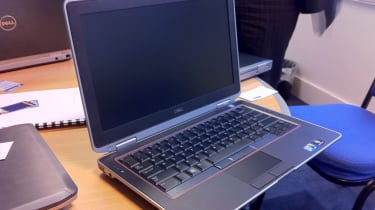 Dell has announced its new range of business laptops equipped with Intel's latest Sandy Bridge processors and we managed to get a sneak peek at the 13.3in model, the Latitude E6320.

Dell's new Latitude laptops are among the first we've seen to come equipped with Intel's new Sandy Bridge processors. The E6320 pre-production unit we saw came fitted with a 2.3GHz Core i5 2410M processor and 2GB of RAM. All other specifications being equal, it should be faster and consume less battery power than a laptop with the comparable previous generation 2.27GHz Core i5 430M processor. The Intel vPro set of administration technologies is also supported.

There are plenty of other interesting things about the Latitude E6320 besides its processor though. Dell has revamped the case design and claims it meets the US Department of Defense MIL-STD-810G standard for ruggedness. The surprisingly rigid lid is made out of aluminium, while a protective magnesium alloy strip wraps around the edge of the laptop. The keyboard is apparently designed to be spill-proof too.

Despite this rugged design, Dell claims it's easy for IT departments to repair and upgrade with all the major components easily accessible. Batteries and docking stations should also work across all Latitude E5000 and E6000 series laptops.

All this doesn't mean the new Latitude E6320 is ugly though it looks surprisingly attractive for a business laptop. The aluminium lid has a brushed appearance, while an orange border surrounds the keyboard. The keyboard itself felt responsive with no noticeably undersized keys during our brief hands-on. ThinkPad fans will be pleased by the presence of a touch stick in addition to the usual touchpad.

Unlike previous Dell business laptops, the E6320 doesn't have a DisplayPort connector for attaching external monitors just HDMI and VGA. Despite being one of the few computer manufacturers to support the new standard, Dell declined to include DisplayPort on the new Latitude range citing the relative unpopularity of the technology especially in the public sector where VGA remains very popular. Dell can also offer customers BIOS and component freezes on a case-by-case basis.

Dell has yet to decide on pricing, but the E6320 should cost roughly the same amount as the current, broadly comparable model, the Latitude E4310, which costs 999 ex VAT. Dell claims that its launch timetable for the new models hasn't been affected by Intel's Sandy Bridge recall, unlike HP. We'll bring you a full review as soon as we can.