HP's ProLiant MicroServer may look like a consumer NAS box, but it's actually aimed at small businesses as a better-designed alternative to a PC for file sharing. We take a closer look to see what else this little cube has to offer. 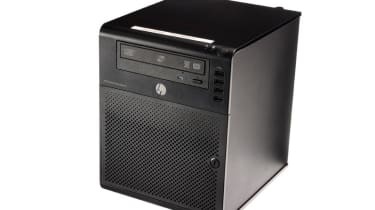 It makes sense for small businesses to use a server for even simple tasks, such as file sharing, but many still see them as expensive and overly complex. HP wants to change their minds as its latest MicroServer N36L is aimed at businesses of up to ten users that want something highly affordable and easy to use.

HP gets the ball rolling by selling the MicroServer at a low price. Only one model is available and its starting price of 235 will have a more than a few small businesses taking notice. Even better is the fact that HP is currently running a 100 cashback offer until the end of February.

The MicroServer is a chunky little desktop cube equipped with a dual-core 1.3GHz AMD Athlon II Neo N36L processor and 1GB of 800MHz ECC DDR3 memory. The price includes a single 250GB SATA hard disk with room for three more inside, but the removable drive carriers are cheap plastic and not very sturdy.

No OS is included in the price but HP offers a choice of Red Hat Enterprise Linux or Windows Server R2 Standard and Foundation. We can't see small businesses with limited IT skills wanting to mess with Linux, so Server 2008 R2 Foundation would be the best bet which, HP tells us, can be preinstalled for 169.

There are a number of restrictions with Foundation. It only supports a maximum of fifteen Windows user accounts. It's 64-bit only, supports only a single processor with multiple cores and won't let you upgrade beyond 8GB of memory, but these are unlikely to be too restrictive for the smaller business, budget-conscious users the MicroServer is aimed at.

The MicroServer itself is well built with a lockable metal door protecting the hard disk carriers. Up above is a single 5.25in bay which is empty on base systems. We had the optional DVD writer supplied in the review system which costs an extra 35.

The small power button on the top edge is a little too exposed, but fortunately won't shut the OS down if pressed accidentally. Below this are four USB ports plus two more round the back along with an eSATA port. There's even an internal USB port which can be used for connecting a boot disk for use with a virtualisation hypervisor.

There may be four drive bays but hardware RAID options are very limited. The motherboard uses an AMD RAID controller which only supports JBODs, stripes and mirrors so you can't create RAID 5 or 6 arrays.The controller doesn't support hot-swap either, so if a drive fails the server must be powered down to replace it. However, it can handle 2TB SATA drives so there should be sufficient future storage expansion for most uses.

As you'd expect, it's very cramped inside. The only way to access the pair of PCI Express slots and memory sockets is to release the motherboard in the base of the server and slowly slide it forward unplugging the various interface and power cables as they become exposed. It takes time, but your patience will be rewarded.

The embedded AMD processor may not be overly powerful, but its TDP of 12W keeps consumption right down. We measured the review system drawing a mere 22W with Foundation in idle which rose to only 31W with SiSoft Sandra pushing the processor to the max.

Another feature that sets the MicroServer apart from your average desktop is HP's optional Remote Access Card (RAC). Costing 55, it slots into the PCI-E x1 slot and provides a dedicated network port for remotely managing and monitoring the server.

Once it's installed, a new IPMI option appears in the BIOS menu where you can assign a fixed IP address to the card or leave DHCP to hand one out to it. In terms of features we put the RAC in between HP's entry-level Lights Out 100i and its top end iLO3.

The web interface provides details on fan speeds and temperatures, plus the ability to remotely power the server on and off or reset it. PEFs (platform event filters) can be used to assign actions to specific events, so if the fans fail or temperatures rise then the server can be automatically powered down, reset or rebooted.

Two features that make the RAC excellent value are KVM-over-IP remote control and virtual media services. The former provides full remote access to the BIOS menu and OS whilst the latter allows you to present devices such as optical drives over the network for the server to use.

The MicroServer is worth considering as a first server as it's good value, small, quiet and has four disk bays. RAID support is very limited and upgrades will be time consuming, but the optional RAC card makes it a good choice for remote office deployments as no other server at this price offers this as an option.

The MicroServer may be low on processing power and tricky to upgrade, but it is a good value choice for small businesses that want their first server. It’s disappointing that despite having four drive bays it doesn’t support RAID 5, but HP’s optional management card does mean it’s well suited to deployment in small remote offices.