We take a look at the rumoured features and hardware of the up-and-coming iPhone 5 to see what business users can expect from Apple’s latest smartphone. 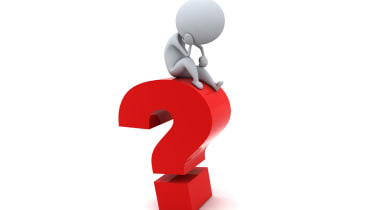 The iPhone, when it launched, was something of a game changer. But a lot has changed since 2007.

Then there's the new line of hardware features dual core processors, NFC chips and netbook-sized portions of RAM that are about to be unleashed on the market in 2011.

All in all, the market is now a lot more advanced and the competition is armed to the teeth. So what can we expect from the iPhone 5? Will it be another game changer from Apple, or just more of the same?

Apple did everything right with the iPhone 4. It has multitasking, a Retina Display and even a new sleek design. But then

"Antenna gate" struck and Apple faced arguably one of its biggest PR catastrophes to date.

Fortunately, Apple had a solution up its sleeve: free bumpers for all. And, in the grand scheme of things, it seemed to work. The iPhone 4 went on to be the fastest selling iPhone model to date.

Needless to say, Apple will not be making this mistake again. For one, professional and casual users alike will not tolerate call-dropping, especially when they've paid so much for a device. So how is Apple planning to remedy this antenna issue?

According to Patently Apple, Apple's latest telephonic patent places the antenna behind the Apple logo on its mobile products.

Apple reportedly chose this place as it is "isolated from other electronic components and therefore protected from anything that could potentially block radio-frequency signals".

One of the key features that Apple is expected to announce along with the next iPhone device or, possibly even earlier at the iPad 2's launch is 3G-enabled FaceTime.

Why Apple didn't introduce 3G-enabled FaceTime when the service originally launched remains to be seen, especially since services like Fring, Google Talk and Skype have been doing it for quite some time.

Nonetheless, when this feature appears it will be good news for businesses as it enables easier, faster and less limited video conferencing facilities.

According to Rob Bamforth, principal analyst at Quocirca, improved video conferencing within devices like the iPhone and iPad should be attractive to business users. The idea being that employees travel less, which increases their productivity in the work place and, as an added bonus, has a positive knock-on effect on the environment through reduced emissions.

Apple has always been pretty much on the money with its hardware. The iPhone 4 featured Apple's custom 1 GHz Apple A4 processor and 512MB of RAM twice that of the iPad. And the iPhone 5 should be no different.

Online speculation from a variety of sources, including 9to5Mac and DigiTimes, seems to suggest that the iPhone 5 will definitely feature some serious hardware improvements. At present, all assertions seem to point towards an updated dual core A4 system-on-a-chip processor, known as the A5.

And in a world where applications, games and software are advancing at an unprecedented rate, Apple is going to need to future-proof the iPhone 5 with a competitive CPU. It simply cannot afford to fall behind the competition in the hardware stakes.

For instance, Dual core processors, in the wake of CES 2011, will be commonplace in the smartphone market of 2011. Just look at the Motorola Atrix a device that features hardware that wouldn't have looked out of place in a netbook two years ago.

We expect the iPhone 5 to feature a dual core processor, which will most likely be the same one that's inside the iPad 2, and have 1GB of RAM or there abouts. Anything less and the iPhone 5 would simply pale in comparison to the competition.

One of the key aspects that enterprises look for in a smartphone is battery life, according to Bamforth.

Mobile phones need to run all day, accessing data, viewing emails and running applications, without dying on the user. And while Apple made some massive improvements to the battery life of the iPhone 4, there is still a lot room for improvement, and it needs to pull out all the stops with the iPhone 5.

"The iPhone 5 needs to be more like a BlackBerry in terms of battery life so business users can trust that it will be functional for the entire working day. And then some," said Bamforth.

Bamforth suggested that one way Apple could conserve battery life could be through improved content controls. For instance, if a user could stream or view a document without downloading it this would not only save on CPU usage, but also conserve valuable data too.

Having said that, Bamforth isn't too optimistic about this type of reform in the way Apple device's obtain and use content. Nevertheless, this is a key issue that Apple needs to address if it wants to make its iPhone more attractive to enterprise users battery life is the key.

Bamforth also seemed adamant that Apple would not be making any massive changes to the iPhone's design per se.

Nevertheless, there has been a lot of talk about the inclusion of carbon fibre as a replacement for the iPhone's glass chassis and a slightly larger screen the vast majority of reports seem to think 3.8in is optimal. If this turns out to be the case, it would no doubt improve the media experience on the device.

There has also been a lot of rumblings about the removal of the Home button in favour of a completely touch screen-oriented device where users can use multi-touch gesturing to navigate the device. Although Bamforth is not convinced.

That said we do expect the iPhone 5 to be slimmer than the iPhone 4 and possibly lighter. Why? Every iPhone device that has been released so far has been slimmer, sleeker and lighter than the last. Why should this trend change now? We can't think of a good reason why it should.

"Near Field Communications is the Holy Grail of the digital wallet phenomenon and has been around for quite some time it's just failed to take off," Bamforth added. It is also strongly rumoured to feature in the iPhone 5.

According to Cult of Mac, a source within Apple has confirmed that the company is very pro-NFC and the technology will feature inside the iPhone 5, effectively turning the device into a digital wallet.

But that's not all. Apple has other plans for NFC technology plans that could be very attractive to enterprise. "Apple has other plans for the NFC chip, and is exploring ways of using the technology to enable users to store their personal Mac computer settings on their iPhone, and then transfer those settings to another Mac with a flick of the wrist," Cult of Mac reports.

So not only will iPhone 5 users be able to make small payments using the NFC, but they'll also be able to carry around their PC's settings on them as well.

returns to its previous state."

The benefits of this kind of NFC usage, particularly in a business context, are huge. Not only will professionals be able to work remotely more easily, but they'll also be able to carry around all their data, files and work in a secure and easy to access environment.

Could Apple be the company that makes NFC mainstream? Bamforth thinks so. He is confident that if anyone can do it, it will be Apple just look at what it did for the tablet and applications.