Fujitsu's new Primergy BX400 S1 blade server is a complete data centre on wheels for SMBs. However, HP sells a very similar system, the c3000 Shorty. Is the new Primergy a match for the Shorty? Dave Mitchell finds out in our exclusive review. 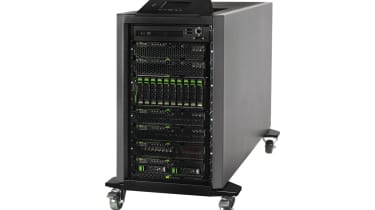 The BX922 has two internal cold-swap SFF SATA disks and twelve DIMM slots supporting up to 192GB of RAM. The BX924 blade supports up to 288GB of memory, but to make room for the eighteen DIMM slots it has two SATA SSDs fitted in cut-outs in the processor heatsinks.

This blade is aimed at virtualisation duties and supports remote booting or loading a hypervisor from an internal USB flash module. The other two blades have embedded four-port Gigabit Ethernet controllers, but the BX924 has two 10-Gigabit Ethernet ports.

All server blades have a riser tray at their rear that accepts a pair of mezzanine cards. Fujitsu currently offers Gigabit, 10-Gigabit, Brocade Fibre Channel and InfiniBand cards.

For storage blades you have the SX940 four-bay hot-swap model which occupies a single slot and uses a direct PCI Express connection via the chassis mid-plane to the server blade below it. The new SX960 is a double-height ten disk version, while for local backup there's the SX910 which has an LTO tape drive.

Four interconnect bays are available and Fujitsu offers a good range of connection options including Gigabit Ethernet, 10-Gigabit Ethernet, InfiniBand and 8Gbps FC blades. The chassis mid-plane is split into three fabrics with the first connecting to the embedded network ports on each blade. Fabrics 2 and 3 link directly to the server blade mezzanine cards.

Power consumption is very low and we measured the chassis with two supplies drawing only 136W. With BX920, BX922, BX924 servers and one SX960 storage blade powered up, total consumption only rose to around 520W.